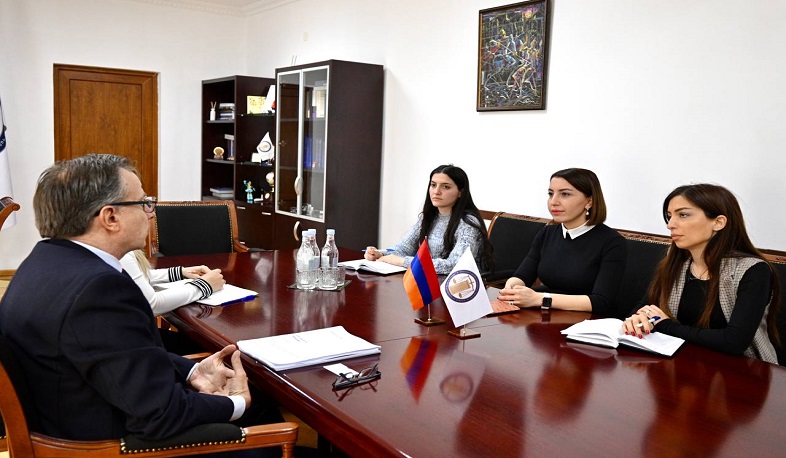 On November 29, the Human Rights Defender, Ms. Kristinne Grigoryan received the Ambassador Extraordinary and Plenipotentiary of the Oriental Republic of Uruguay to the Republic of Armenia, H.E. Mr. Eduardo A. Rosenbrock Bidart. Ms. Grigoryan expressed gratitude to the Ambassador for his visit and highlighted his activities aimed at the protection of human rights.

The Ambassador presented to the Defender the "National Plan without Gender-Based Violence" adopted by the National Assembly of Uruguay and handed over the annual Report of the Uruguayan Ombudsman.

The Defender noted that although there is no action plan at the state level for the fight against domestic violence in Armenia, there is a Women's Affairs Council adjunct to the Prime Minister of the Republic of Armenia. Ms. Grigoryan also mentioned that the country has a national strategy and action plan for the protection of human rights, which provides more comprehensive actions.

Ms. Grigoryan presented the activities carried out for combating violence against women. The Defender emphasized the importance of education in this mission. “Being aware is important and education is key. The Government has assumed commitment to move forward in this direction, and the role of the HRD is to monitor those activities, point out issues and recommend solutions."

The Defender informed the Ambassador about the establishment of Public Council on Women's Rights adjunct to the Human Rights Defender, one of the priorities whereof is to promote the engagement of women in the law enforcement system. Ms. Grigoryan also presented the involvement of women in the legislative, executive and judicial authorities of the Republic of Armenia.

At the end of the meeting, the parties expressed willingness to continue cooperation.