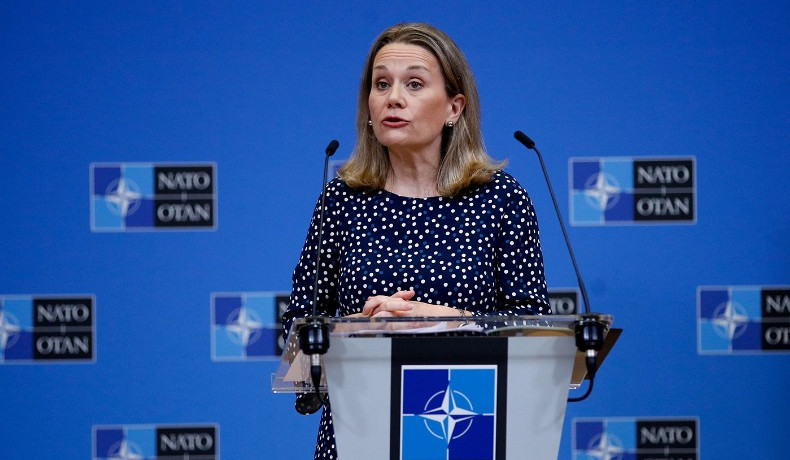 Ambassador Julianne Smith, U.S. Permanent Representative to the North Atlantic Treaty Organization (NATO), referred to the question what is her ssessment on the current level of Russia’s threat in the South Caucasus, in particular: Azerbaijan, Armenia, and Georgia.
“On the question of whether or not NATO is debating or discussing the possibility of designating Russia as a terrorist state, I think probably the best thing for me to do would be just to talk about my own country’s policy on that front. You may want to ask other NATO member states where they are on this. But certainly from the U.S. perspective, I think you’ve heard President Biden and others across the administration comment on this. And the feeling in Washington is that this really isn’t necessary at the moment, and in fact could be perhaps counterproductive in the sense that it could inhibit or hinder our ability, for example, to either get humanitarian assistance into Ukraine or some of the grain out of Ukraine.
For that reason, the focus of the United States, in working closely with many partners and allies around the world, has been to turn to sanctions and to identify ways in which we can layer on additional sanctions to put that added pressure on Putin and his wider government, the regime in Moscow; but also to look for ways to really apply pressure on their economy and, in fact, prohibit the Russian military from advancing or building new capabilities in the wake of this war. So the focus there has been a combination of sanctions, export controls, et cetera. But I really don’t see any movement, certainly in the United States, towards that particular outcome.
On the question of Georgia, I mean, obviously this continues to be an issue for Georgia as a strong NATO – very strong NATO partner, and we are increasingly thinking about ways that we can offer our support to the people of Georgia. We’ve been focused on Georgia and Russia’s activities and actions there ever since 2008 when Russia went into Georgia. They still have a presence, as you well know, in Georgia. And in terms of grading whether or not it’s more or less, I mean, I would really leave it to the people of Georgia to give you their firsthand impressions.
But what I will say is that the Alliance was all in full agreement that these three countries needed to be present at this ministerial because we want to find ways to strengthen our support to these countries in terms of how they’re feeling the very real impacts of the war in Ukraine and look for ways to enhance those important partnerships”, Smith said.
Views 436