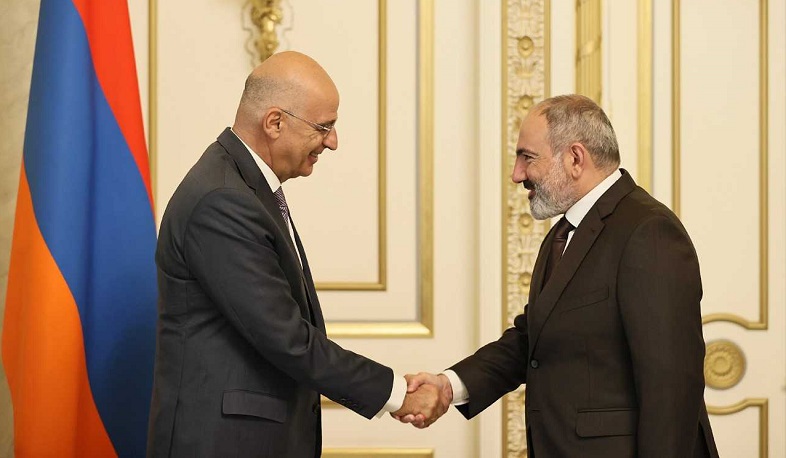 Pashinyan receives the delegation led by the Greek Foreign Minister

Armenian Prime Minister Nikol Pashinyan received the delegation led by Greek Foreign Minister Nikos Dendias, the Government's press office reports.
The Prime Minister welcomed the visit of Mr. Dendias to Yerevan and noted the importance of the dynamic development of Armenian-Greek relations. Nikol Pashinyan expressed confidence that this visit will give a new impetus to bilateral partnership. At the same time, the Head of the Government emphasized the importance of the trilateral meeting of the foreign ministers of Armenia, Greece and Cyprus held in New York for jointly coping with challenges, ensuring stability and peace in the region, as well as expanding relations in different directions. The Prime Minister expressed hope that high-level mutual visits will be intensive.
Nikos Dendias noted that Greece also attaches great importance to the consistent development of multidimensional relations with Armenia. He noted that the trilateral meeting held in New York was effective and the discussions in that format will continue. According to the Greek Foreign Minister, the Greek and Armenian peoples are connected by age-old friendship and they are committed to raising the bilateral cooperation to a new level.
The interlocutors exchanged ideas on the processes taking place in the South Caucasus. Prime Minister Pashinyan presented details on the consequences of Azerbaijan's aggression against the sovereign territory of Armenia. The Head of the Government emphasized the importance of an adequate reaction of the international community aimed at the withdrawal of the Azerbaijani units from the territory of the Republic of Armenia and preventing any new aggression. The Prime Minister also referred to Armenia's positions regarding the unblocking of transport infrastructures in the region, border demarcation between Armenia and Azerbaijan.
Nikos Dendias added that Greece will make every effort to contribute to overcoming the challenges faced by democratic and fraternal Armenia.
Views 394