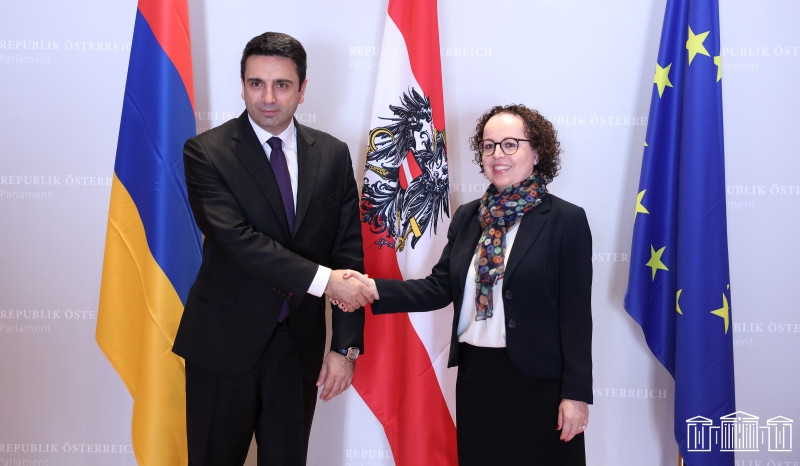 The delegation led by the President of the National Assembly of Armenia Alen Simonyan, who is in Austria on an official visit, was received by the President of the Federal Council of the Republic of Austria Christine Schwarz-Fuchs.
In a conversation with his colleague, the President of the National Assembly of Armenia mentioned that in recent years a positive dynamic of the development of bilateral relations has been observed in the political platform between Armenia and Austria: active reciprocal visits, meetings at the level of presidents, prime ministers, foreign ministers have taken place.
He added that it is necessary to establish cooperation between the Armenian parliament and the upper house of the Austrian parliament, as parliamentary diplomacy plays a significant role in the Armenian-Austrian bilateral agenda at both the federal and decentralized levels.
Alen Simonyan reaffirmed Armenia's commitment, together with its European partners, to expand and deepen the process of institutional reform aimed at further strengthening democracy, human rights and the rule of law. In this sense, according to Alen Simonyan, the entry into force of the Armenia-EU Comprehensive and Enhanced Partnership Agreement is a turning point, which will open new perspectives for the deepening of Armenia-EU cooperation.
Issues related to Armenia-EU visa liberalization, opening of the Austrian Embassy in Armenia, opening of Austrian visa services in Yerevan were discussed during the conversation.
Touching upon the 44-day war and the numerous problems that arose as a result, Alen Simonyan once again welcomed Austria's efforts aimed at strengthening peace and stability in the region, creating an atmosphere of mutual trust, and developing regional cooperation.
The parties also touched upon the importance of the centuries-old Armenian community in Austria, which is a reliable bridge between the two countries. Christine Schwarz-Fuchs proudly emphasized Armenians' great contribution to their country's cultural, economic and political life.
At the end of the meeting, the President of the Federal Council of Austria highlighted the visit of the President of the National Assembly of the Republic of Armenia, mentioning that it will provide new opportunities for the expansion of inter-parliamentary cooperation between Armenia and Austria. "We are interested that people of Nagorno-Karabakh live in favorable conditions. In this sense, you can consider Austria as a reliable partner”, President of the Federal Council of the Republic of Austria Christine Schwarz-Fuchs said.
Views 44