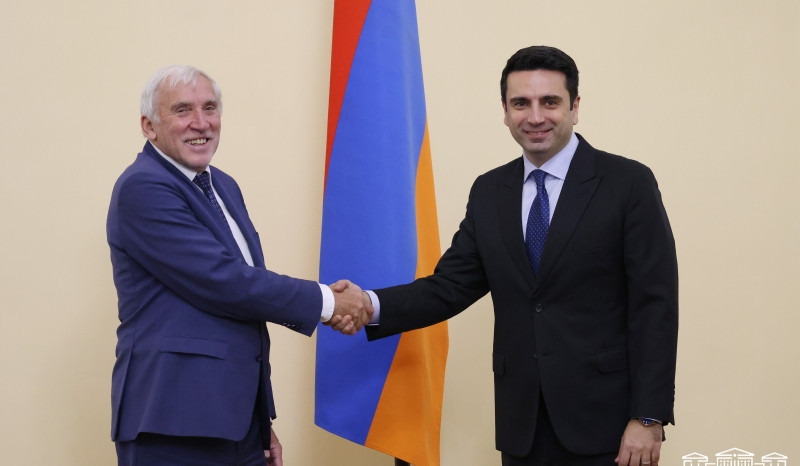 On May 19, the RA NA President Alen Simonyan received the delegation of the Standing Senate Commission on Media led by the First Vice President of the Senate of the Czech Republic Jiří Růžička.

The RA NA President highlighted the fact that the Czech colleagues are concerned about the media problems in Armenia today, mentioning that most of the heads of different wings of the power of our country are from the media field. He also reminded about his former media activities, stressing that the freedom of speech and press are one of the priorities of our country.

The sides expressed satisfaction for the rather active cooperation during the last years between the parliaments of Armenia and the Czech Republic. The RA NA President informed the attendees that he invited the President of the Chamber of Deputies of the Parliament of the Czech Republic Markéta Pekarová Adamová to Armenia.

Both sides highly appreciated the cooperation between the Friendship Groups functioning in the National Assembly of Armenia and in the Chamber of Deputies of the Parliament of the Czech Republic.

Taking into consideration the fact that at the second half of the current year the Czech Republic will assume the presidency in the Council of the European Union, Alen Simonyan mentioned that Armenia expects the political support of the Czech Republic in launching the dialogue on the visa liberalisation. He considered important the activation the Eastern Partnership Programme within the framework of the presidency of the Czech side, as because of the change of geopolitical realities its de-integration is noticed. Alen Simonyan added that the Armenia-European Union Comprehensive and Enhanced Partnership Agreement opens new perspectives for deepening cooperation not only with the European Union, but also the member countries, particularly the Czech Republic.

At the meeting, the 44-day war and the problems caused because of it was touched upon. As a result of exchange of ideas on the settlement of the humanitarian issues, the RA NA President asked the Czech colleagues’ support for their quick solution.