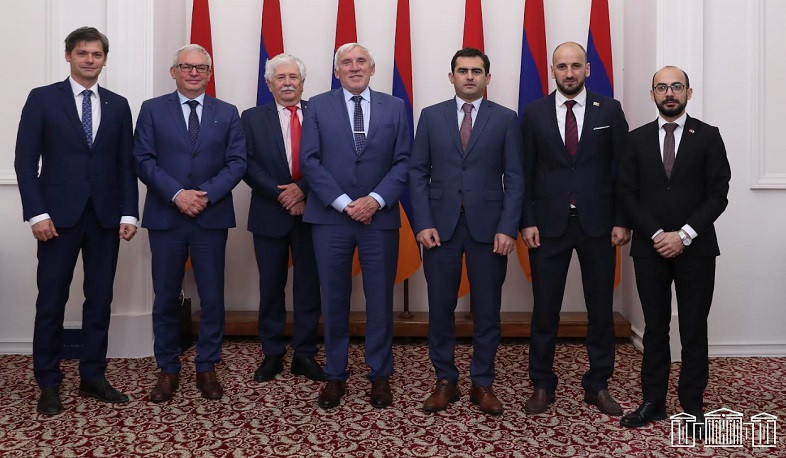 On May 18, the RA NA Vice President Hakob Arshakyan received the delegation led by the First Vice President of the Senate of the Czech Republic Jiří Růžička, where members of the Standing Senate Commission on Media were included.

The Chair of the NA Standing Committee on Science, Education, Culture, Diaspora, Youth and Sport Sisak Gabrielyan and the Head of Armenia-Czech Republic Friendship Group Artur Hovhannisyan attended the meeting.

Hakob Arshakyan underlined with satisfaction that at the level of Friendship Groups and on the international different platforms the Armenian-Czech cooperation effectively develops. In this context the NA Vice President has noted that Armenia expects the political support of the Czech Republic in the visa liberalization, taking into consideration the fact that in the second half of the current year the Czech Republic will assume the presidency of the Council of the European Union.

Touching upon the role of the free press in our country and the steps being undertaken in strengthening democracy, the NA Deputy Speaker assured that after 2018 revolution Armenia recorded progress in those issues. According to him, the opposition press prevails in the field, and the opposition voice is completely audible.

Speaking about the regional and humanitarian problems created because of 44-day war, Hakob Arshakyan voiced the issue of the release of Armenian prisoners of war and other held persons being Azerbaijan. It was noted that in the last report of the Human Rights Watch organization there are facts on the inhuman conditions and tortures of holding Armenian prisoners of war.

“We expect our Czech colleagues’ practical support in urgent returning Armenian prisoners of war to the homeland, as well as our efforts being made in saving the Armenian historical-cultural and the religious heritage on the territories of Artsakh appeared under the Azerbaijani control,” Hakob Arshakyan said.

The First Vice President of the Senate of the Czech Republic has noted that his country is also interested in the release of the persons being under captive in Azerbaijan. According to him, as an EU member and a Christian country, the Czech Republic highlights the preservation of the Armenian Christian values. The necessity of the regulation of the problems through peaceful means was stressed.

Emphasizing the stability and peace in the region, the NA Vice President reaffirmed the freedom and security of Artsakh, the determination of the self-determination of the people living in Artsakh and the Armenian side protecting the right to live in its historical Motherland. To his assessment, the issue of the security and status of Nagorno Karabakh can be solved only through negotiations with the mediation of the OSCE Minsk Group Co-Chairmanship.

Hakob Arshakyan expressed his gratitude to his colleague for recognizing and condemning the Armenian Genocide by the two chambers of the Parliament of the Czech Republic, noting that the condemnation of crimes against humankind has no alternative.

“Your aspirations and steps in the spheres of media, democracy and the democratization of the legislative field are welcomed for us,” Jiří Růžička stressed.

Hakob Arshakyan also related to the efforts of the Armenian side aimed at the normalization process of the Armenian-Turkish relations and the establishment of peace in the region. Issues on the internal political situation of the country were presented.

The sides discussed the problems of the media sphere, referred to the legislative steps and measures being taken for the unbiased work of the mass media. The Armenian-Czech cooperation in this field.