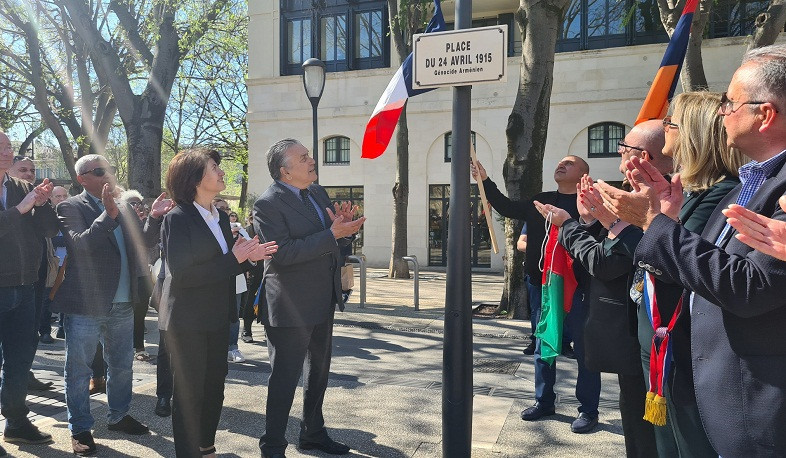 On April 16, a solemn opening ceremony of an Armenian khachkar (cross stone), and a square dedicated to the memory of the Armenian Genocide victims, took place in the center of the French city of Nimes.

The Mayor of Nimes Jean-Paul Fournier, the Ambassador of Armenia to France, Hasmik Tolmajyan and the President of the Armenian Association of Nimes (Amicale Franco-Armenienne de Nimes et du Gard) Armen Martirosyan made speeches during the event. The ceremony was also attended by the Chairman of the Standing Committee on Defense, Armed Forces of the French National Assembly, François Dumas, as well as the Armenia’s Consul in Marseilles Samvel Lalayan.

In her speech, the Armenian Ambassador recalled the important role that France played in sheltering Armenian refugees who survived the genocide. The importance of France recognizing the Armenian Genocide in 2001 by law, as well as the inclusion of April 24 in the list of French State Remembrance Days from 2019 was stressed.

The Ambassador thanked the Mayor of Nimes, the City Council, for approving the initiative to name a square after the Armenian Genocide and immortalize the khachkar. The Ambassador also expressed gratitude to the relatively newly formed French-Armenian community in Nimes, in the person of the Armenian Association of the city, its President Armen Martirosyan, for the implementation of this important initiative. The speeches were followed by a khachkar blessing ceremony.

On the same day, Ambassador Tolmajyan met with representatives of the French-Armenian community of Nimes to discuss issues of concern to the community. The Ambassador thanked the community for the donation of more than 60,000 euros to the ‘Hayastan’ All-Armenian Fund during the war in Artsakh (Nagorno-Karabakh) in 2020.