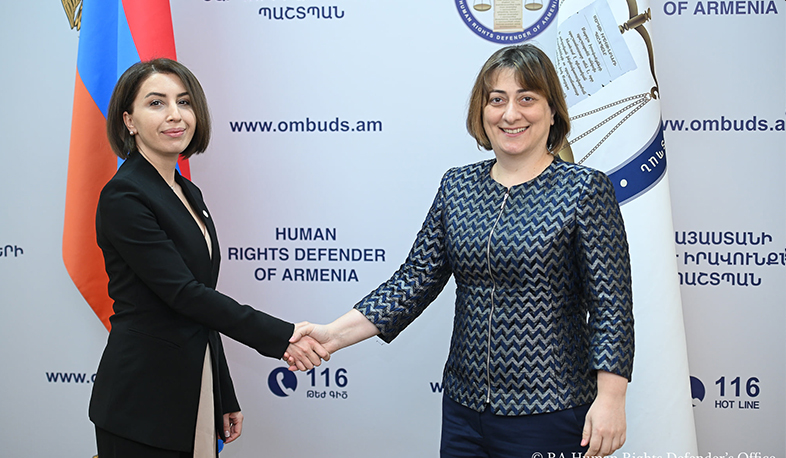 Welcoming the international partners at the Office of the Human Rights Defender, the Defender praised the high level of cooperation between the UN Development Programme and the

Office of the Defender, highlighting, at the same time, the urgency to deepen the cooperation due to priorities which have arisen as a result of new challenges.

In turn, Natia Natsvlishvili congratulated Kristinne Grigoryan on assuming the mission of the Human Rights Defender, noting that they see a great opportunity in relation to the institutional strengthening of human rights protection in Armenia.

Before discussing issues related to cooperation, the Human Rights Defender Ms. Grigoryan presented to Ms. Natia Natsvlishvili the current situation in Artsakh in connection with

the provocations initiated by the Azerbaijani side, as a result of which the Armenian side has deaths and injured. Ms. Kristinne Grigoryan stressed that human rights are universal.

The Defender, presenting the chronology of the criminal acts of the Azerbaijani side, which are motivated by ethnic hatred, underlined that a population of more than 100.000 ethnic Armenians are in fact deprived of all international guarantees of human rights protection, which in turn gives an impetus for Azerbaijan to commit even more brutal and inhumane acts.

Ms. Natia Natsvlishvili thanked the Defender for the detailed information, and noted that the concerns and issues raised would be reported to the UN Headquarters.

Within the framework of the cooperation agenda, the Defender Ms. Grigoryan and Ms. Natia Natsvlishvili discussed a number of issues related to the development of the Office of the Defender (expansion of regional offices), increasing of its research capabilities, gender equality, and the exclusion of all forms of discrimination and hate speech.

Concluding the meeting, the parties agreed to continue the implementation of the current joint programs, and to outline new directions of cooperation.