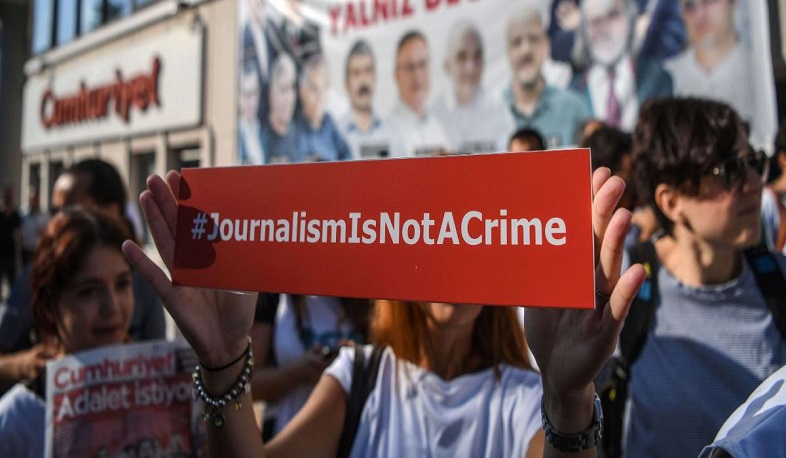 News cameraman Rojhat Doğru has been jailed for life with an additional sentence of 12 years and a month for covering protests in Turkey over the Islamic State’s (ISIS) siege of the Syrian Kurdish city of Kobani, Ahval reports.
Doğru was convicted by a majority decision at the Diyarbakir 8th High Criminal Court on charges of disrupting the unity of the state and integrity of the country, propagandising for a terrorist organization, and attempted killing, the news site said.
His lawyer, Resul Temur, said the accusations against his client were made by merging three files and that the prosecution had ignored key evidence and witness statements.
Doğru’s won widespread acclaim for his coverage of the nationwide protests in October 2014 sparked by ISIS’ prolonged assault on Kobani, a town just meters across the Turkish border that became synonymous with the resistance of Syrian Kurdish forces against the jihadi group.
In 2015 he was awarded the top prize in the video news category by the Southeastern Journalists Association (GGC). After receiving the reward, he was the target of threats by outlets linked to the Free Cause Party (HÜDAPAR), a Kurdish Islamist movement whose supporters clashed with protesters during the unrest. As many as 37 people are believed to have died in the violence.
Doğru was accused by prosecutors of participating in the protests himself as well as wounding someone with a gun.
At trial, his lawyer dismissed this possibility. “It is against the natural flow of life for Rojhat Doğru to hold the camera in one hand and to carry out an armed attack with a weapon in the other,” he said, according to Bianet.
Doğru was not in court to hear the judgement. His lawyers said they will appeal the decision.
Views 66