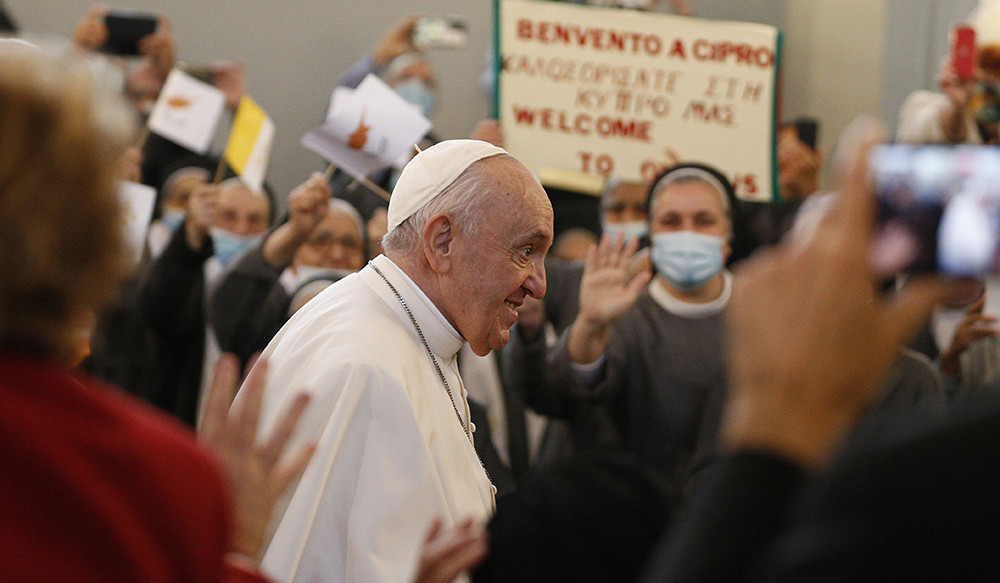 Pope Francis lamented centuries of hostility and prejudice that have divided Catholics and Orthodox as he met Friday with the leader of Cyprus’ Greek Orthodox Church and pointed to works of charity as a means to help heal the rift between Catholic West and Orthodox East.

Archbishop Chrysostomos II hosted Francis for private talks at his residence and then invited the pope to the brand new Orthodox Cathedral of St. Barnabas for an encounter with the Holy Synod, the highest decision-making body of the Greek Orthodox Church.

Sitting in front of the gilded iconostasis, or altar, and as the Orthodox clergymen chanted, Francis lamented the “broad furrows” that history had cleaved between Catholics and Orthodox as a result of the 1,000 year-old schism, when God wanted all Christians united.

“Centuries of division and separation have made us assimilate, even involuntarily, hostility and prejudice with regard to one another, preconceptions often based on scarce and distorted information, and spread by an aggressive and polemical literature,” Francis said. “This too makes crooked the path of God, which is straight and directed to concord and unity.”

He said concrete joint works of charity, education and efforts to promote human dignity can help Catholics and Orthodox “rediscover our fraternity, and communion will mature by itself, to the praise of God.”

In a sign of that unity, two Orthodox bishops attended Francis’ Mass later Friday at Nicosia’s main sports stadium for Cyprus’ tiny Catholic community. The stadium, which seats 22,000, was less than half full and Francis eschewed his usual popemobile roundabout to greet the faithful before the Mass, presumably because the crowd only filled one set of stands.

There too, though, Francis urged a message of unity in a country lacerated by divisions, even among Catholics. “Healing takes place when we carry our pain together, when we face our problems together, when we listen and speak to one another,” he said.

On his part, Archbishop Chrysostomos said the Cypriot church enjoys “excellent relations” with all churches and has in recent years pursued dialogue with Muslim leaders in the Middle East - an effort he said was largely ruined by “extremist elements” who “inflamed passions.”

“We resolutely believe in the peaceful resolution of our differences whether those are ethnic or religious. And the only correct course is through a genuinely sincere dialogue,” he said.