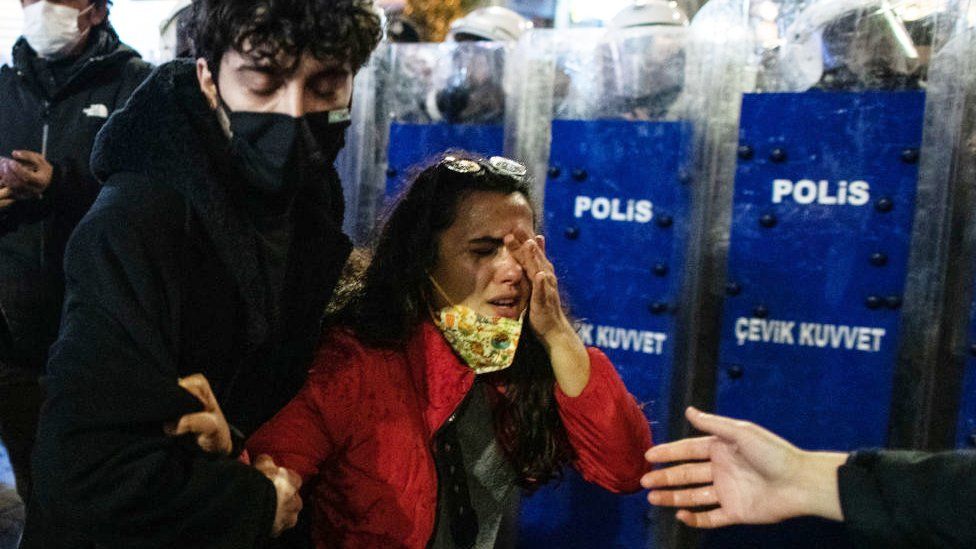 Clashes as protesters demand end to violence against women

Riot police in Turkey and Mexico have fired tear gas and smoke bombs at protesters calling for an end to violence against women.

In the Mexican city of Guaymas, three people were shot dead in an apparent attack on the city's female mayor.

And in the Turkish city of Istanbul, clashes broke out with security forces.

There were also large rallies in Barcelona, Paris and London to mark the international day for the elimination of gender-based attacks.

Mexican media say the incident in Guaymas saw armed attackers storm the city's municipal palace, shooting dead a female protester and two men - a government worker and a bodyguard for Mayor Karla Córdova, who was in the palace at the time.

Eyewitnesses told local journalists that they heard something like a grenade exploding at the door of the building, before gunshots rang out.

The identity of the attackers and their motives remain unknown.

There was another rally in Mexico City, where crowds chanted "not one (woman) less" as they demanded an end to femicide - the intentional murder of women because of their gender.

Police fired smoke bombs at a small group of hammer-wielding protesters who tried to grab their shields.

At least 10 women and girls are killed every day in the Latin American country, according to Amnesty International.

The demonstration in Istanbul's Taksim Square came just months after Turkey withdrew from an international treaty aimed at protecting women.

Police scuffled with protesters as they urged them to disperse from the area.

Many demonstrators were pictured holding banners while others called for the government to resign over its withdrawal from the Istanbul Convention in June.