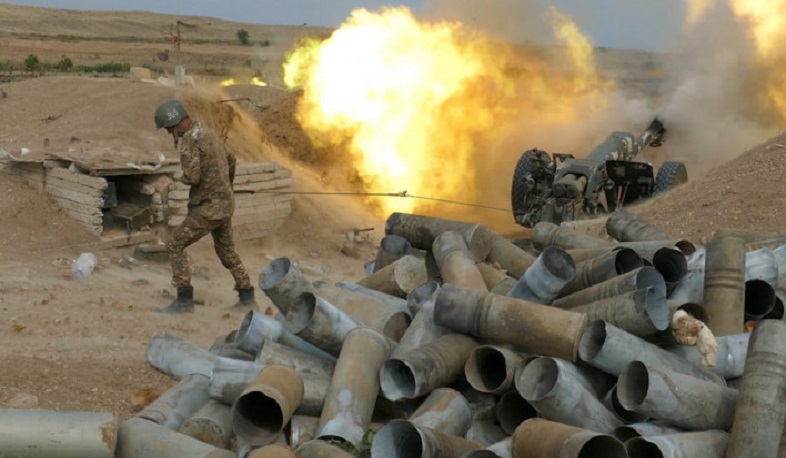 One year ago today Azerbaijan, with open support of Turkey, unleashed a large-scale offensive against the Republic of Artsakh (Nagorno-Karabakh). In the early hours of September 27, the Azerbaijani units launched military actions along the entire length of the line of contact with Artsakh, employing the whole arsenal at their disposal.

In response, Armenia and the Republic of Artsakh introduced martial law and total mobilization.

Azerbaijan was heavily supported by Turkey throughout the battles. Ankara recruited mercenary terrorists from Syria to fights against the Armenian forces. International organizations and officials from different countries confirmed the fact. Two Syrians were eventually captured and sentenced to life in Armenia.

During the 44 days of fighting, the parties agreed to cease the hostilities thrice with the mediation of the Minsk Group co-chairing countries – Russia, France and the US, but failed to abide by the ceasefire.

Heavy fighting continued until November 9, when the leaders of Armenia, Russia and Azerbaijan adopted a statement on ceasefire. Under the document, Russian peacekeeping forces were deployed all along the line of contact.

The Armenian side lost 7 regions adjacent to Artsakh, Hadrut and Shushi. It was decided that Russian peacekeepers will be deployed in Nagorno-Karabakh, all economic and transport ties will be opened in the region, and a land connection will be provided through Armenia to connect Azerbaijan with Nakhichevan.

According to latest update provided by Prime Minister Nikol Pashinyan, 3 777 people were killed in the war, 3 702 of them military and 75 civilian.

One year after the start of the battles, some are still missing. According to Artsakh’s State Service of Emergency Situations, 1 670 bodies and remains have been retrieved, the search for the missing continues.

Azerbaijan is yet to fulfil its commitment to release all Armenian prisoners of war, hostages and other detainees.

On January 11, 2021 a second trilateral statement was adopted on the establishment of a working group co-chaired by the Deputy Prime Ministers of Armenia, Russia and Azerbaijan to discuss the unblocking of regional communication and transport links.

The Mother See of Holy Etchmiadzin and diocesan cathedrals will serve a requiem ceremony at 10 am today, honoring those who died in the 2020 Artsakh war.

Catholicos Karekin II will preside over the requiem mass at St. Gayane Monastery.

At 11 am, Armenia and the Republic of Artsakh will observe a moment of silence in memory of the victims.