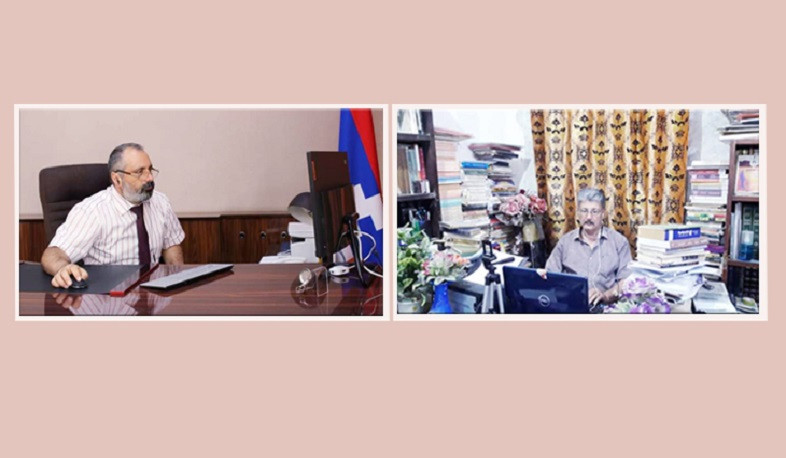 We are still an established independent state fighting for its international recognition: Davit Babayan

What is the status of post-war Karabagh and what status will the efforts of the NKR authorities be aimed at in the future?

The status of Karabakh after the third Karabakh war unleashed by Azerbaijan, Turkey and international terrorists has not actually changed. The aggression was aimed at the complete destruction of the Republic of Artsakh, its people and statehood. But, the criminal plans of this alliance have not been materialized. Despite heavy human, material and territorial losses, the Republic of Artsakh has preserved its independence and statehood. We are still an established independent state fighting for its international recognition.

What is the status of the Russian peacekeepers in Karabakh? Do they contact directly with the NKR authorities or act through the authorities of Armenia or Azerbaijan?

Is the NKR maintaining relations with other countries after the war?

The Nagorno-Karabakh Republic has quite extensive relations with many countries. At the state level, we were recognized by Abkhazia, Pridnestrovie, South Ossetia, as well as a number of American and Australian States, cities and municipalities of America and Europe. The Armenian Diaspora, which is a kind of bridge connecting our country with different states, also contributes to the strengthening and developing relations with different countries. The Republic of Artsakh also has its Representation Offices abroad.

The Arab world is of particular importance for us. Our relationship with the Arabs and the Arab civilization are centuries-old.

I would like to note, for example, that in due time Artsakh played a key role in the history of Islam. In the 9th century, it was Artsakh that neutralized one of the greatest threats ever facing Islam - the Babek revolt (826-837 AD). If successful this uprising could have ruined the Islamic civilization and today we would have a totally different world.

As for modern history, we all remember very well the helping hand extended by the Arab peoples to the Armenians during the monstrous Genocide perpetrated by the Turks in 1915-1923. Tens of thousands of Armenians found their second homeland in such Arab countries as Iraq, Syria, Lebanon, Egypt, and others. These countries made it possible for our compatriots to feel safe and fully realize themselves. We are very grateful to the Arabs for all this.

Today, the Armenian communities of the Arab countries are one of the most organized segments of our Diaspora actively promoting the establishment of friendly and fraternal relations between our peoples and states. There are great opportunities and a wide scope of work here.

As for Turkey, this country is conducting destructive and subversive work in various regions, especially along the perimeter of its borders, and this is a threat not only for Arab countries. By its actions, active support of radical and terrorist groups Turkey poses a threat to Islam as a whole, undermining this great world religion from the inside. I am sure that the Arab world realizes this as well.