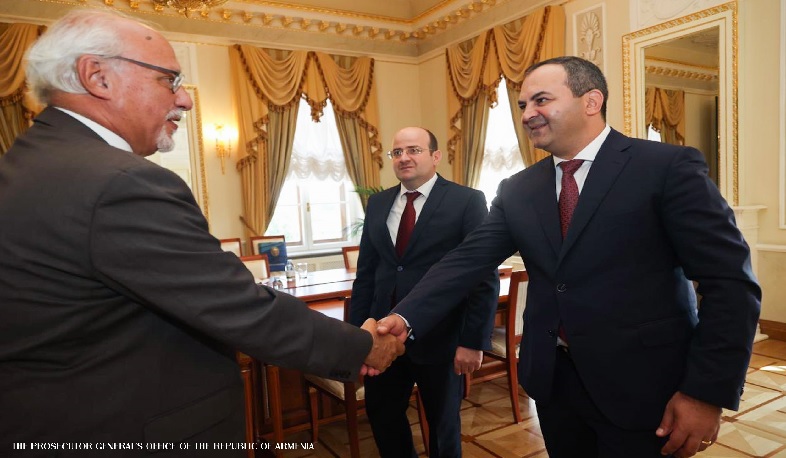 Prosecutor General of Armenia Artur Davtyan met with Director General of Human Rights and Rule of Law of the Council of Europe, Christos Giakoumopoulos, in St. Petersburg, Russia, on the sidelines of the Conference of Heads of Prosecutor’s Offices of European States.

The officials highly valued the quality of relations between Armenia and the Council of Europe, appreciated the CoE-Armenia long-term partnership in the fight against crime, within the frames of which the Prosecution of Armenia is involved in CoE respective programs.

At the meeting the humanitarian consequences of the 2020 Artsakh War, especially from the perspective of the violations of fundamental human rights and freedoms, were discussed.

Prosecutor General of Armenia Artur Davtyan presented the Azerbaijani violations both during the war and after that, the violations of the rights of Armenian prisoners of war and civilian captives by Azerbaijan. He highlighted the necessity of properly reacting to such developments by the international community and the CoE structures in particular.

Artur Davtyan said the fulfillment of the 2020 November 10 trilateral statement on the ceasefire could be a guarantee for establishment of peace in the region, for economic and other cooperation. However, he said, the unconstructive actions of the Azerbaijani side do not lead to the stabilization of the situation and directly contradict the demands of the trilateral statement.

As a vivid example of the Azerbaijani unconstructive step, Mr. Davtyan recalled the sham trials of the Armenian prisoners of war by the Azerbaijani authorities, stating that all these processes are accompanied by multiple gross violations of human rights.

At the end of the meeting both officials agreed to regularly exchange information about the matter.