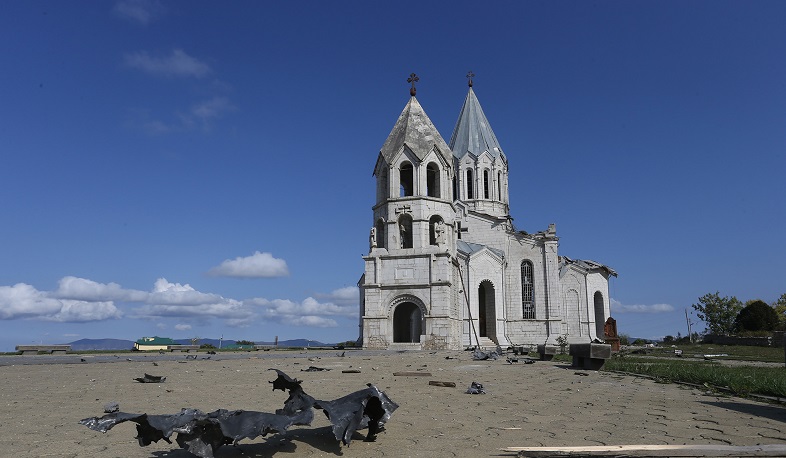 Acting Minister of Education, Science, Culture and Sport of Armenia Vahram Dumanyan has sent a letter to the UNESCO Director General, expressing his concerns over the actions being carried out by Azerbaijan in Shushi’s Ghazanchetsots Cathedral.

Dumanyan stated in the letter that during the large-scale military aggression unleashed by Azerbaijan against Artsakh (Nagorno-Karabakh) on September 27, 2020, Azerbaijan, among other military crimes, has deliberately targeted the Ghazanchetsots Cathedral, as a result of which one of the two domes of the Church has been destroyed. Thus, the Second Protocol of the Hague Convention adopted in 1954 for the Protection of Cultural Property in Case of Armed Conflict was violated. Moreover, the photos and videos spread on the internet prove that the Church has been vandalized after the end of the battles, and the second dome has been damaged by the Azerbaijani forces, too.

Recently, Azerbaijan, under the pretext of ‘renovation works’, has removed the dome of the Cathedral, trying to change the historical and architectural look of the monument and distort its Armenian identity.

Dumanyan stressed that there are many grounds to believe, that Azerbaijan is deliberately blocking the entry of UNESCO experts to the Armenian cultural heritage sites aiming to at hiding its war crimes. Moreover, Azerbaijan is actively conducting a policy of falsifying the historical facts, calling the Armenian cultural heritage sites in Artsakh as ‘Caucasian Albanian’.

Highly valuing the key role of UNESCO in the preservation of cultural heritage, Dumanyan called on the UNESCO Director General to condemn the attempts of eliminating and appropriating the Armenia cultural heritage sites.