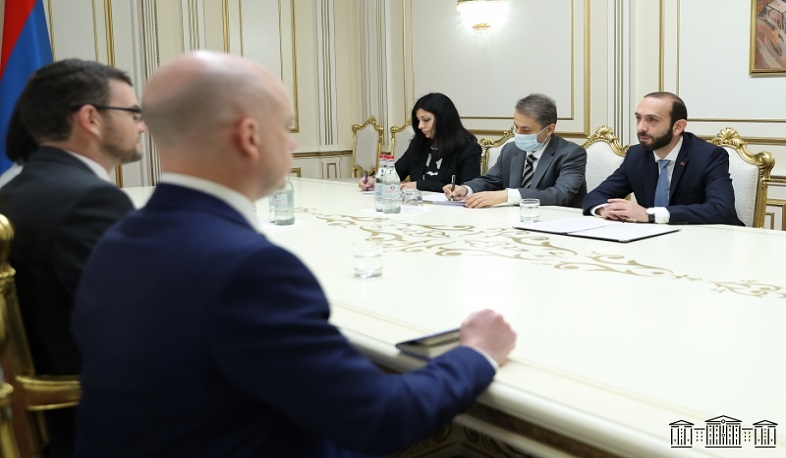 Azerbaijan continues to violate the norms of international humanitarian law by not releasing prisoners of war: Ararat Mirzoyan to John Gallagher

On May 6, Armenia’s Parliament Speaker Ararat Mirzoyan received the Ambassador Extraordinary and Plenipotentiary of the United Kingdom of Great Britain and Northern Ireland to Armenia John Gallagher.
Welcoming the guest, Ararat Mirzoyan congratulated him on being appointed Ambassador in our country and expressed confidence that during Gallagher’s tenure the Armenian-British relations would be more strengthened.
“We are concerned about expanding and deepening the relations with the United Kingdom and we highlight the role of the National Assembly in this dialogue,” Ararat Mirzoyan noted.
The Head of Parliament considered important the support of the United Kingdom in the development of different spheres in our country. “As NA Speaker I evaluate the participation of the United Kingdom in the UN programme ‘Modern Parliament for a Modern Armenia,’ where concrete and tangible results have been recorded.”
Touching upon the cooperation between the parliaments, the Head of the legislative body expressed hope that in parallel with overcoming the pandemic the contacts between the Friendship Groups would more activate.
Taking the advantage, the NA Speaker invited the members of the Friendship Group of the Parliament of the United Kingdom with our country to Armenia.
“Last year our country confronted with a bigger calamity, than the pandemic. Azerbaijan with obvious support of Turkey began war against the Armenians of Nagorno Karabakh, during that period committing military crimes, targeting the civilian population and the infrastructures. As a result, ceasefire regime was established, but until nowadays, Azerbaijan continues violating the norms of the international humanitarian law, the provisions of the Geneva Convention - not releasing the Armenian prisoners of war. This is an extremely urgent problem for us, and all our international colleagues, being led by humanitarian aspirations, should immediately intervene to this issue,” the NA President underlined.
Mirzoyan expressed concern about the specific barbaric attitude towards the Armenian monuments in the territories appeared under the control of Azerbaijan. “Unfortunately, Azerbaijan continues the evident Armenophobic policy and the aggressive statements, and its vivid example is the opening of the park by the president of Azerbaijan in Baku.”
According to the Head of Parliament, the warrant of ensuring the security of Artsakh is the recognition of its self-determination. Regarding the final solution of the conflict, according to Mirzoyan, it is possible to reach it through peaceful negotiations in the format of the OSCE Minsk Group Co-Chairmanship.
The Ambassador has noted that the United Kingdom is interested in preserving stable peace in the region.
During the meeting the snap parliamentary elections to be scheduled on June 20 was also referred to. The NA President assured that the authorities would make all efforts for holding elections complying with the international highest standards.
Views 42