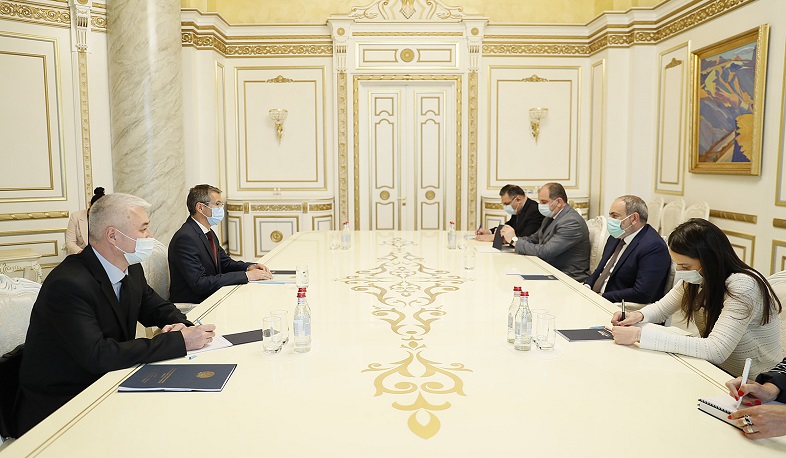 Nikol Pashinyan received the new ambassador of Kazakhstan to Armenia

Congratulating Ambassador Imanbayev on starting his mission, Pashinyan noted that Armenia and Kazakhstan are closely cooperating in both bilateral and multilateral formats, but nevertheless the trade turnover doesn’t correspond to the existing potential.

“Great attention must be paid to deepening of economic partnership because it is one of the most important indicators of development of cooperation,” Pashinyan said. According to the acting PM, there is a viable Armenian community in Kazakhstan and Armenia is grateful to Kazakhstan for the conditions and opportunities of the community’s activities.

The ambassador concurred with Pashinyan that the existing potential in the economic sector isn’t fully utilized, and said that he will actively work in both economic and other mutually-beneficial directions. Ambassador Imanbayev highly appreciated the Armenian community’s role in various sectors of Kazakhstan’s public life, mentioning that an ethnic Armenian politician has been elected to Kazakhstyan’s parliament in the recent election.

The interlocutors exchanged ideas over the Armenian-Kazakh relations agenda and actions for enriching it.

The inter-governmental commission for economic cooperation was highlighted, which plans to hold the next meeting during this year.

Mentioning that he is impressed with the 2021 Almaty Digital Forum and Kazakhstan’s experience in this sector, Pashinyan found partnership between the IT communities of the two countries to be interesting.

Ambassador Imanbayev said that Kazakhstan is implementing continuous structural and strategic reforms and in this context attached importance to exchange of experience with Armenia, given the successful reforms in tax administration, healthcare, education and other areas.

Pashinyan addressed the situation which is created after the war unleashed by Azerbaijan against Artsakh, the humanitarian issues, and said that Azerbaijan continues to refuse to implement the 8th term of the 2020 November 9 statement, thus disrupting stability in the region. Pashinyan presented to the ambassador the Azeri policy of destroying Armenian churches and monuments of Nagorno Karabakh in the territories which have gone under Azeri control, stressing that the progressive international community must make efforts to prevent this vandalism.

Pashinyan wished productive work to the ambassador and asked him to convey his warm greetings to the Kazakh President, the first president, the prime minister.