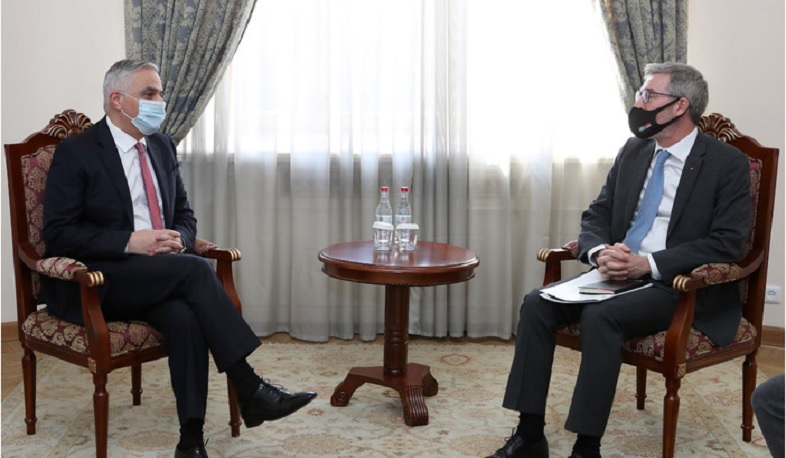 The RA Deputy Prime Minister Mher Grigoryan received the Ambassador Extraordinary and Plenipotentiary of Sweden to Armenia Patrick Svensson.
Welcoming the Ambassador, the Deputy Prime Minister attached importance to Sweden's decision to have a resident Ambassador in Armenia in the context of  development of bilateral relations. Grigoryan congratulated the Ambassador on his appointment to this important position.
Mher Grigoryan noted that there is a great potential for the development of Armenian-Swedish relations, particularly in the trade and economic sphere, the realization of which requires joint efforts. The Deputy Prime Minister also spoke about the war unleashed by Azerbaijan in September and the socio-economic situation in Artsakh as a result. The challenges of the 2020 coronavirus pandemic were also addressed.
The Ambassador Patrick Swenson, thanking for the reception, in his turn highlighted the deepening of cooperation between the two countries, noting that Sweden welcomes the Government's readiness to implement systemic reforms in Armenia. The ambassador also noted that his country is ready to continue supporting the implementation of these reforms. He singled out three areas in which it is planned to assist Armenia: defending of human rights, development of a market economy and environment.
During the meeting, both sides highlighted the importance of the presence of Swedish business in Armenia, the presentation of Armenia's opportunities for that, taking into account the prospect of entering the EEU market.
The interlocutors stressed the importance of completing the process of ratification of the Armenia-EU Comprehensive and Enhanced Partnership Agreement. They also referred to the process of regional transport unblocking.
Views 57