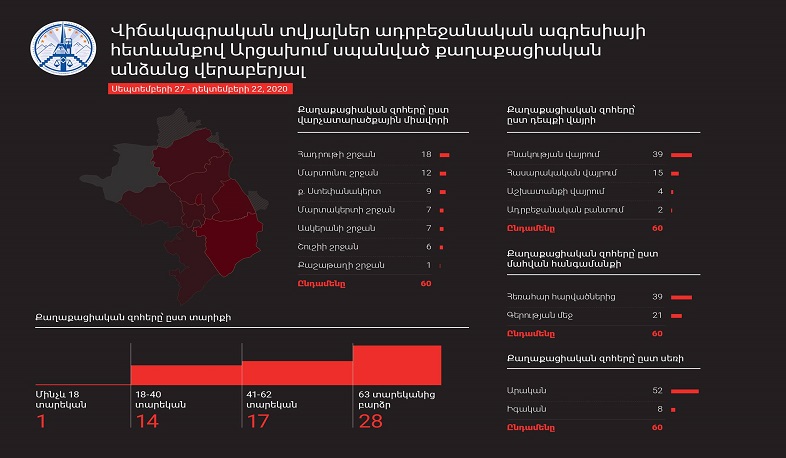 The Human Rights Ombudsman of the Republic of Artsakh prepared and published an interim report on the cases of the killing of civilians in Artsakh by the armed forces of Azerbaijan.

The report summarizes the cases of civilian casualties, caused as a result of the military aggression unleashed by Azerbaijan and Turkey against the Artsakh Republic since September 27, 2020, as well as killings of civilians who were imprisoned in the areas passed under the control of the Azerbaijani armed forces. The cases are introduced with relevant brief information.

From September 27 to December 22, 2020, 60 civilians were killed by the Azerbaijani armed forces, which are documented with facts. 39 of them were killed as a result of targeted strikes, 21 - in captivity. A number of cases of torture and mutilation of corpses, inevitably targeted civilian deaths were recorded. The Human rights Ombudsman also recorded the cases of 163 civilian injuries, most of which resulted from strikes that resulted in the deaths of others.

This document presents only the confirmed cases on indisputable grounds, but the staff of the Human Rights Ombudsman of Artsakh also received incomplete information on other alleged cases, which have not yet been fully verified.

In addition, at the time of publication of the report, on the basis of the Ombudsman's fact-finding activities, about 40 missing civilians have been recorded, some of whom, according to proven data, are in Azerbaijani captivity, despite the official silence of the Azerbaijani authorities.

However, the practice suggests that some of the mentioned civilians were allegedly killed by the Azerbaijani armed forces. It is not excluded that their bodies will be found in the near future as a result of search operations in their places of residence like some bodies have been found to date. For the above reasons, the lists and statistics provided are still preliminary, and fact-finding work is ongoing.

Section 2 of the Report presents the 39 civilian casualties killed by long-range strikes by the Azerbaijani armed forces, including the cases of missile strikes, shelling, bombing, and gunshots of subversive groups.

Section 3 summarizes the data on 21 civilian casualties who were killed in Azerbaijani captivity, or at least under their control, through physical violence, stabbing, beheading, close-range shot, and other direct means. Given that the bodies of some of the killed were found long after the death, in some cases, it became impossible to assess in detail the circumstances of the death and the traces of the crimes. However, in some cases, brief information from the preliminary findings of forensic examinations is also provided.