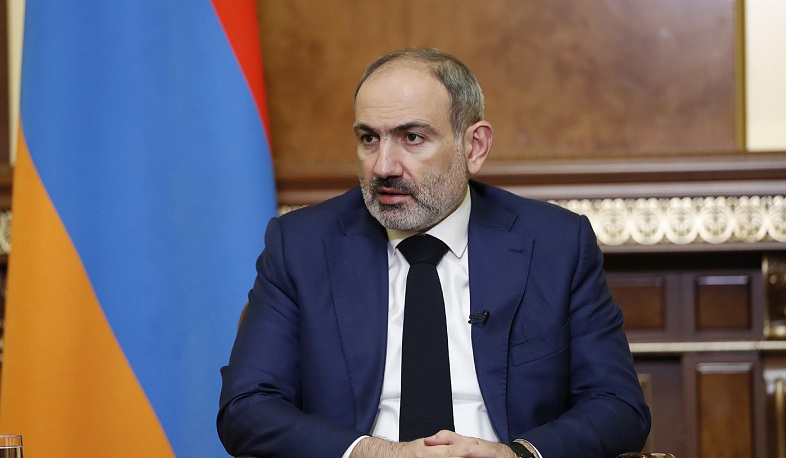 We are not going to concede the “Czechoslovakia” to anyone: Nikol Pashinyan

Question: Mr. Prime Minister, thank you for the interview. The war in Nagorno Karabakh between Armenia and Azerbaijan started one month ago. At what point are we now with this war?

Prime Minister Nikol Pashinyan: First of all, let us record what is going on and who is fighting against Nagorno-Karabakh. And let us state that Turkey was the main instigator of this war. Turkey transported mercenaries, terrorists from Syria, and transferred part of its armed forces to Azerbaijan, including military equipment, armed groups from Pakistan, which have set a goal to take control of Nagorno-Karabakh by means of a blitzkrieg. According to their estimates, the war should have lasted a maximum of one week, or 10 days.

And what is happening here is a continuation of the policy that Turkey has been pursuing in the Mediterranean, with regard to Greece, Cyprus, Libya, Syria and Iraq. And again my record is that it is an imperial policy, because in fact the Armenians in the South Caucasus are the last obstacle for Turkey on the way to expanding its imperial policy to the north, east and south-east. My view remains the same. If Western societies fail to adequately assess Turkey’s actions, they will have to meet them in Vienna in the near future.

Question: What can you realistically expect from the European Union, knowing that some EU countries are blocking sanctions against Turkey on other subjects?

Prime Minister Nikol Pashinyan: We are trying to pin our hopes on our own resources and those countries that are bound by reciprocated commitments with Armenia. You asked me what is happening. What I mean is that the European Union should take action for itself. It is up to you to make a relevant decision. I am supposed to care about the security of Yerevan, Armenia and the Armenian people; Vienna’s security is not in my working logic. I can only warn you against the imminent threat.

This war started earlier in Europe, and it is going on every day. The fact that long-range artillery is not working over there does not mean that the war has not started yet. That war is going on.

There are forces that know the following: Europe has been living in prosperity for about 60 years, and prosperity prevents us from noticing the war that is taking place in Europe today, because a prosperous person tends to be guided by a “wishful thinking logic” until bombs explode in the courtyards, houses. This opens up a vast field for many forces.

Question: What war do you mean that is happening now in Europe?

Even during the Cold War, I do not know of any case where a Soviet or any European leader said things like that about his French counterpart. What is it if not war? The point is whether you wish to ignore the war, or not.

Yes, people are being beheaded on the streets of Europe; people are happy that they have not yet been decapitated. I call it the mechanics of genocide. If this time someone’s head is not cut off, it does not mean that the same thing will not happen next time.

Question: You recently said there is no diplomatic solution at this moment. Where are we now?

Prime Minister Nikol Pashinyan: I said at this stage when the leaders of the OSCE Minsk Group co-chairing nations - the presidents of Russia, France and the United States - took turns to broker a ceasefire, but the ceasefire failed to come into effect.

Question: This war has reached a new level of aggression since you got into power – is there anything you could have done to prevent that?

Prime Minister Nikol Pashinyan: The situation has not really changed since 2011, because the problem is that the issue can only be resolved through compromise. What is the situation we have since 2011? Naturally, compromise means agreeing to something that is not at first acceptable to you, and we have had such dynamics since 2011.

What becomes acceptable to Armenia as a result of a specific concession becomes unacceptable for Azerbaijan from that moment on. And Azerbaijan expects the Armenian side, Karabakh, to make more concessions. This is the reason for the outbreak of aggression you say. Because, of course, there is a compromise, but on the one hand, we cannot afford unlimited concessions, when the other side is not prepared for a compromise just because it has more money to buy more weapons.

And I can answer your question: what else could I have done to prevent this war? I could give up defending the interests of Nagorno-Karabakh and Armenia at all. But would that have prevented the war? No, because at the lowest point of our concession Azerbaijan should have demanded more.

I recently made a parallel between the Munich Agreement and our situation. Before the outbreak of World War II, the European powers thought that by ceding Czechoslovakia to Hitler they could whet his appetite and there would be no war in Europe. And what happened as a result: Hitler swallowed Czechoslovakia and as the other saying goes, appetite is aroused when eating. If the European leaders had not surrendered the Czechoslovakia, and a war started, journalists like you would say, “Is there anything you could do better? For instance, why did you not surrender the Czechoslovakia? While the questioned leaders would say, yes, we should have been a little more flexible in the case of the Czechoslovakia. They turned out to be more flexible, and what is the outcome?

Question: What compromise would you be ready to made?

Prime Minister Nikol Pashinyan: We are not going to concede the Czechoslovakia to anyone.

Question: Are you going to ask Moscow to intervene? If so, would that be on a humanitarian level or military level?

Prime Minister Nikol Pashinyan: The issue of Moscow’s intervention must be viewed in several ways. There is Moscow as an OSCE Minsk Group co-chair, and there is Moscow, which is Armenia’s strategic partner. Moscow, the co-chair of the OSCE Minsk Group, is a mediator; it must act in the logic of balancing, which is understandable. And I said that I am for the deployment of Russian peacekeepers to the conflict zone. But the problem is that the deployment of Russian peacekeepers has to be acceptable to all parties to the conflict.

In fact, it is acceptable for Armenia, for Karabakh, and it can happen, as our Russian colleagues stated, if Azerbaijan agrees to it, too. And in general, any peacekeeper can be deployed with the consent of the parties. As far as Armenia’s strategic partner is concerned, Moscow will fulfill its commitments in the event of a real threat to Armenia’s territorial integrity, including through military means.

Question: Has any other country offered to send foreign peacekeeping troops to Nagorno-Karabakh?

Prime Minister Nikol Pashinyan: There is no country, but this topic has always been raised in the negotiation process; But we believe that the optimal solution is the deployment of Russian peacekeepers.

Question: Does the bombing of civilians in Ganja by Nagorno Karabakh forces undermine Armenia’s position as just defending its people? Don’t you think that responding to this bombing by shelling civilian areas does not undermine your position towards the international community?

Prime Minister Nikol Pashinyan: No. Because the question is why Ganja was shelled. And why was Stepanakert being shelled for 10 days, and longer? Why were Martakert, Askeran, Martuni and Shushi bombed? Why was the St. Ghazanchetsots Church in Shushi shelled? Moreover, if one projectile had fallen, we could have considered it an accident. But the Armenian church in Shushi was bombed twice. Why was it bombed?

Question: Don’t you think that to responding by also bombing civilian areas does not undermine your position towards the international community?

Prime Minister Nikol Pashinyan: The Nagorno-Karabakh Defense Army had identified legitimate military targets in Ganja and it did not hit but military targets. Perhaps civilian infrastructure has also been affected in the shelling. But there is no military target in Shushi’s St. Ghazanchetsots Church.

Question: Are you also in contact with the Iranian leadership? And what are your expectations from Iran?

Prime Minister Nikol Pashinyan: Iran is our neighbor and a friendly country. During this time I had a phone conversation with the President of Iran, our Minister of Foreign Affairs is in contact with the Minister of Foreign Affairs of Iran; other Armenian state agencies are cooperating with Iranian partners in an effort to analyze and assess the situation. After all, we have a common border, and our border guards are cooperating, too.

Question: You mentioned 3 ceasefires before. The first one was brokered by Russia, the second one by France, and the third one by the United States. All three, as you said, were broken within minutes. Are you not afraid that you are now off options to resolve the conflict peacefully if the ceasefires were broken so fast?

Prime Minister Nikol Pashinyan: Well, now, in fact, you are saying that a diplomatic solution is not possible at the moment.

Question: I am asking.

Prime Minister Nikol Pashinyan: It is clear that you are asking. But now you are actually saying what you are asking me. I can also ask you, why do you say that the options are running out and what happened to the diplomatic solution?

Question: I do not think there are no other options. But when the big countries, the big powers such as Russia, France and the United States try to broker ceasefires, and this are broken immediately, what can be done?

Prime Minister Nikol Pashinyan: Czechoslovakia must be able to defend itself. It must do everything to protect himself.

Question: What would be your message to the world?

Prime Minister Nikol Pashinyan: My main message is as follows. Unfortunately, from an “x” moment - it was around the 2000s – international media outlets started to describe the Nagorno-Karabakh issue as a territorial dispute between Armenia and Azerbaijan.

In fact, the Nagorno-Karabakh issue has nothing to do with the territorial dispute. Meanwhile, the Karabakh movement, which started 10 or 12 years ago, was considered to be the forerunner of the collapse of the Berlin Wall, because the Karabakh movement came as an expression of democratization in the Soviet Union.

The Armenians of the Nagorno-Karabakh Autonomous Region, who, as always, accounted for 80 percent of the local population, decided to defend their rights in the context of the democratization of the Soviet Union when Mikhail Gorbachev was democratizing and rebuilding the Soviet Union.

And what right was violated? In the early 20th century, when the Soviet Union was being formed, the South Caucasus became part of the Soviet Union and soviet republics were being formed. As a result of Stalin’s arbitrary decision, with its Armenian population of 80% Nagorno-Karabakh was handed over to Soviet Azerbaijan and not to Soviet Armenia.

And we think that the principle of “remedial secession” should be applied to Nagorno-Karabakh, because being left within Azerbaijan means ethnic cleansing and genocide of the Armenians in Nagorno-Karabakh. As far as I know, you have been to Karabakh, you have seen the rocket fire. That is the answer to that question.

Can anyone explain why Stepanakert is being shelled? For one simple reason; to make its residents give up the idea of living there. This is a very important formula for ethnic cleansing and genocide. And our main message is that Nagorno-Karabakh needs “remedial secession”.

Question: Do you consider it serious that Armenia could be attacked in this war?

Prime Minister Nikol Pashinyan: We have already been under attack.

Question: On the military base?

Prime Minister Nikol Pashinyan: Yes, we have already seen such attacks, and that scenario cannot be ruled out.