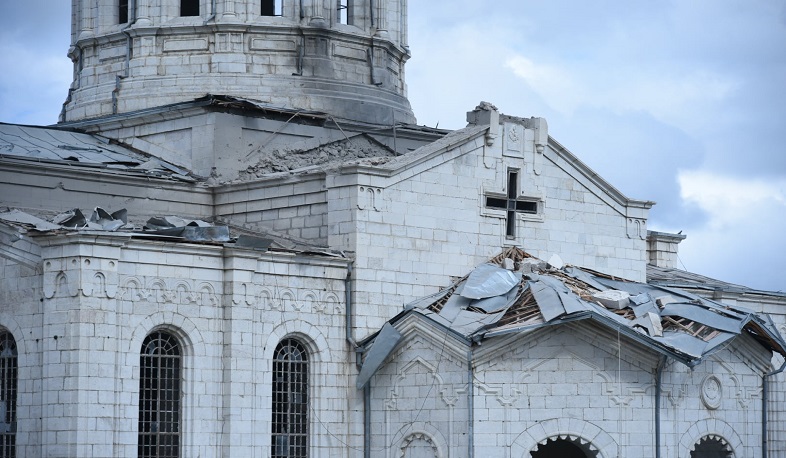 "Within the framework of the fact-finding mission carried out by the staff of the Artsakh Human Rights Ombudsman, an ad hoc public report was released on the "The Azerbaijani targeted attacks against the St. Holy Savior Ghazanchetsots Cathedral of Shushi, Artsakh (Nagorno-Karabakh) as a war crime and crime against humanity. The report is available in English.
The report presents the facts on targeted attacks on the St. Holy Savior Cathedral of Shushi, analyzing it in the context of the International Humanitarian Law and International Criminal Law.
The presented facts reasonably prove that the Azerbaijani atrocities against the Artsakh population launched since 27th September 2020 are accompanied by intentional attacks on the Armenian cultural and religious heritage in the territory of Artsakh.
On 8 October 2020, Azerbaijani armed forces, twice within a few hours with the use of striking and manageable drones, struck the Holy Savior Ghazanchetsots Cathedral of Artsakh in the town of Shushi, which is the recognizable cultural and religious symbol of Artsakh.
This act of Azerbaijan is in line with the state policy of Armenaphobia and ethnic cleansing in Azerbaijan. It also demonstrates continuous radical disrespect towards the Christian heritage of Armenian identity".
This is posted on the Facebook page of the Artsakh Ombudsman.