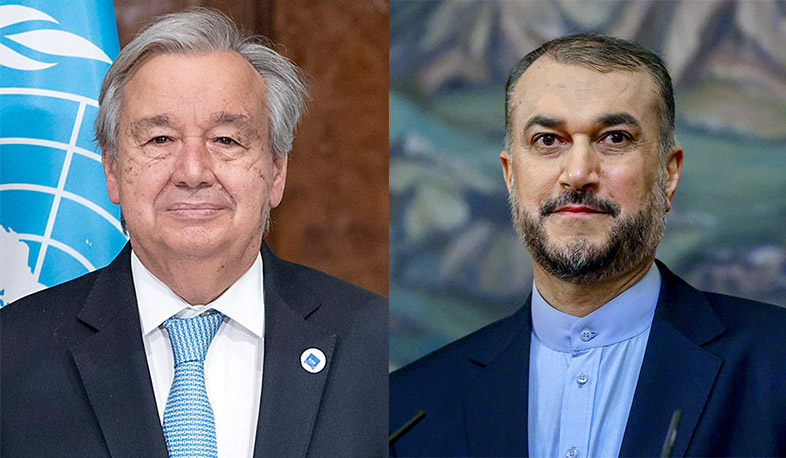 Amirabdollahian had telephone conversation with Guterres

In the telephone conversation, Amirabdollahian outlined Iran’s principled view about the developments in the Ukraine conflict and noted that the root-cause of the conflict lies in NATO’s flawed policy of eastward expansion.

He denied as baseless the claim that Iran has sent weapons to Russia for use in the Ukraine conflict.

Amirabdollahian said such allegations are aimed at legitimizing Western weapons supplies to Ukraine.

He said those who level such accusations against Iran and criticize Tehran are the ones responsible for the outbreak and the continuation of the Ukraine conflict.

Amirabdollahian reaffirmed Iran’s opposition to arms sales to the warring sides in the conflict as it would cause deaths and material damage to both parties.

The foreign minister underlined that Iran will continue relentless efforts to stop the conflict between Russia and Ukraine and restore lasting peace to Europe.

Amirabdollahian also pointed to the developments in Iran and explained how the US and a few Western governments had encouraged rioting and terrorism in Iran by use of wrong information and targeted abuse of international mechanisms.

He stressed that Tehran believes that diplomacy and dialog are the best option, underscoring that the Islamic Republic in not unable to resort to other options.

The UN chief for his part stressed that he will continue efforts toward regional dialog and appreciated Iran’s support and constructive role to this end.

The UN secretary general expressed hope that Tehran’s efforts to end the Ukraine crisis will lead to the establishment of a ceasefire and the solution of the problem.

He further described as valuable Iran’s initiative to form a national committee to investigate the events in the Islamic Republic.

The UN secretary general underscored that dialog and diplomacy are the suitable way to resolve regional and global disputes and thanked Tehran’s role in helping end the Yemeni crisis though political means. Guterres said it is necessary Iran continue to play a role regarding the issue.

The two sides also discussed the latest state of the sanctions removal talks and the cooperation between Iran and the International Atomic Energy Agency.