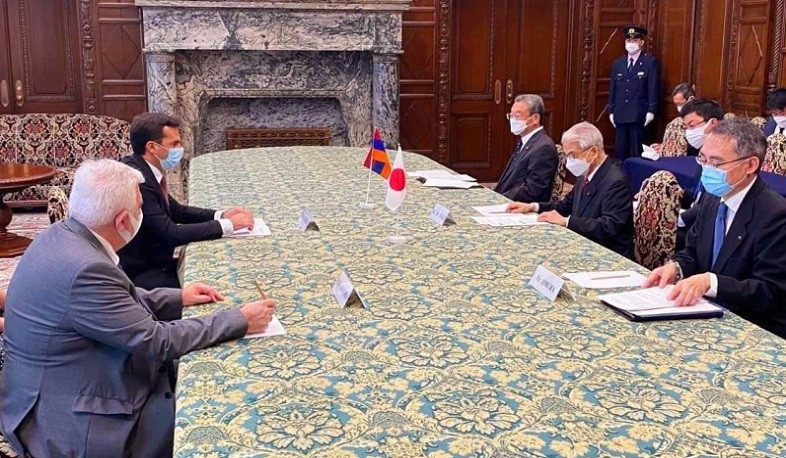 Japan is ready to support establishment of peace in region: Hakob Arshakyan met with Hidehisa Otsuji

The Vice Speaker of Parliament of Armenia Hakob Arshakyan had a meeting with the President of the House of Councilors (Upper House of Parliament) of Japan Hidehisa Otsuji in Tokyo on September 28.
Vice Speaker Arshakyan briefed Mr. Otsuji on the Azerbaijani attack against the sovereign territory of Armenia on September 13-14, including the Azerbaijani strikes at Armenian civilian and military infrastructure, towns and villages, which claimed the lives of both servicemembers and civilians. Arshakyan attached importance to the international community’s targeted condemnation of Azerbaijan’s aggressive actions.
“Hidehisa Otsuji expressed regret over the recent military clashes between Armenia and Azerbaijan and expressed condolences over the human losses in Armenia. Hidehisa Otsuji said that Japan favors peace everywhere, and that they are ready to support the establishment of peace in the region,” the parliament’s press service said.
Bilteral relations were also discussed and willingness to make extra efforts to deepen and expand the political and culture ties between Armenia and Japan was voiced.
Arshakyan also met with the acting chairman of the Japan-Armenia parliamentary friendship group Takeaki Matsumoto.
The Vice Speaker also met with Minister of Education, Culture, Sports, Science and Technology of Japan Keiko Nagaoka.
Developing cooperation in education, intensifying scholarships and exchange programs, possibilities for deepening cooperation in scientific-educational and IT areas were discussed.
Arshakyan also met with Keiichiro Nakazawa, the Senior Vice President of JICA  - the Japan International Cooperation Agency.
A number of issues of developing cooperation in humanitarian, scientific, cultural, economic, high tech, crisis prevention areas were discussed. The parties attached importance to cooperation between universities of the two countries and mutual visits of Armenian and Japanese scientists and researchers.
Views 622