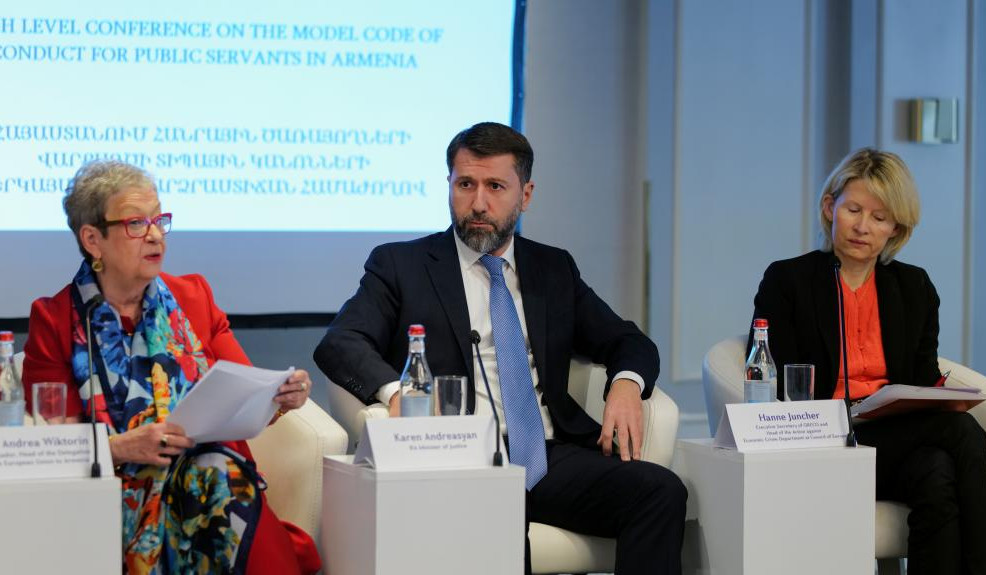 Government is doing its best to fulfill all GRECO advisory requirements: Karen Andreasyan

Minister of Justice of Armenia Karen Andreasyan delivered opening remarks at the high-level conference organized by the Council of Europe's Group of States Against Corruption (GRECO) and the Corruption Prevention Commission of the Republic of Armenia on the presentation of standard rules of conduct for public servants in Armenia.

In the event attended by Executive Secretary of GRECO and Head of the Action against Economic Crime Department at Council of Europe Hanne Juncher, Head of the EU Delegation to Armenia Andrea Wiktorin, Deputy Minister of Justice of Albania Adea Pirdeni, President of the Corruption Prevention Commission Haykuhi Harutyunyan and other local and international dignitaries, Karen Andreasyan presented the institutional success of the Armenian Government with EU support in the anti-corruption field.

Andreasyan highlighting the great role of GRECO in the fight against corruption, noted that the Government, in the person of the Ministry of Justice and other state bodies, is doing everything possible to fulfill all GRECO's advisory requirements and expressed hope that all of them will be implemented in the near future.

The head of the EU Delegation to Armenia, Andrea Wiktorin thanked the Ministry of Justice for the development and smooth implementation of the anti-corruption policy, and in that context emphasized the process of developing and adopting standard rules of conduct for public servants.

The conference also highlighted the importance of mentoring, training public officials and promoting good behavior at all levels of public service.