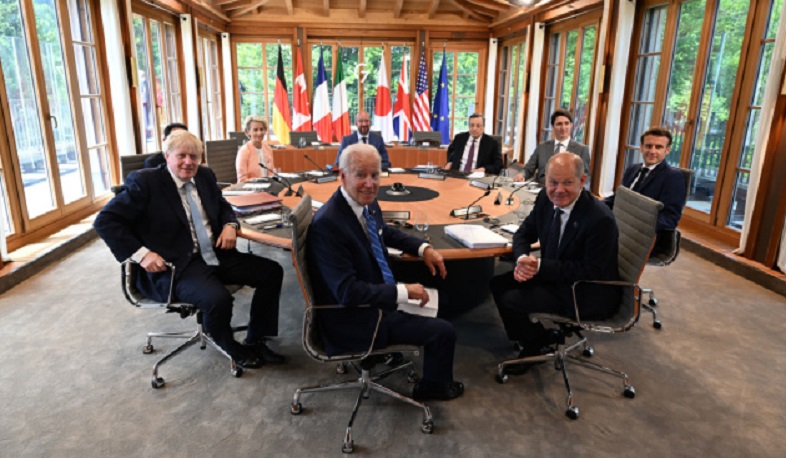 The Group of Seven rich democracies will commit on Tuesday to a new package of coordinated actions meant toraise pressure on Russia over its conflict in Ukraine, and will finalize plans for a price cap on Russian oil, a senior U.S. official said on Monday, Reuters reports.

The announcement came amid news that Russia looked set to plunge into its first sovereign default in decades and Ukrainian President Volodymyr Zelenskiy spoke to address G7 leaders meeting at an alpine resort in southern Germany.

"The dual objectives of G7 leaders have been to take direct aim at (Russian President Vladimir) Putin's revenues, particularly through energy, but also to minimize the spillovers and the impact on the G7 economies and the rest of the world," the U.S. official said on the sidelines of the annual G7 summit.

G7 nations, which account for nearly half the world's economic output, are determined to crank up the pressure on Russia without stoking already soaring inflation that is particularly hurting the global south. The price cap could hit the Kremlin's war chest while actually lowering energy prices.

G7 leaders will also make an "unprecedented, long-term security commitment to providing Ukraine with financial, humanitarian, military and diplomatic support as long as it takes", including the timely provision of advanced weapons, the White House said in a fact sheet.

Western sanctions have hit Russia's economy hard and the new measures are aimed at further depriving the Kremlin of oil revenues. G7 countries will work with others - including India - to limit the revenues that Putin can continue to generate, the according to the U.S. official.