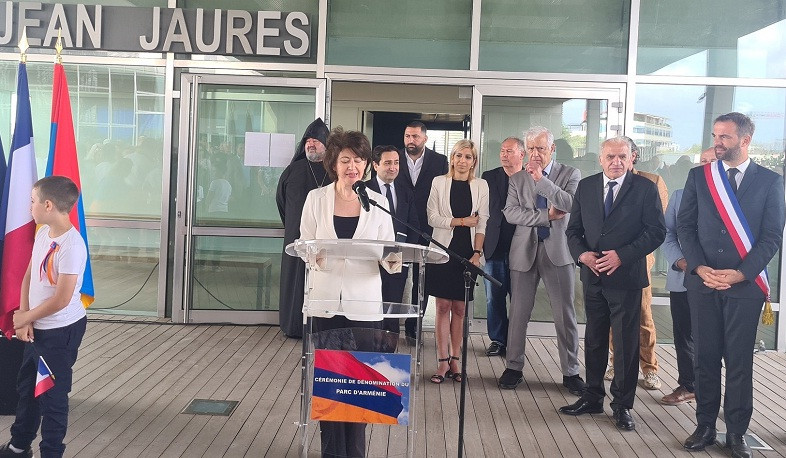 A large park near the City of Montpellier, France, has been named after Armenia as a sign of Armenian-French friendship.

Ambassador Tolmajian thanked the Montpellier City Council and Mayor Delafosse for naming one of the city’s central parks after Armenia, emphasizing that it is a tribute to the strong friendship between Armenia and Montpellier, which dates back to the Middle Ages, when active contacts were established between the Armenian Kingdom of Cilicia in and the historical Languedoc region of France. In this context, the Ambassador also mentioned the solemn hospitality shown to the last Armenian King Levon V Lusinyan in Montpellier.

The Ambassador expressed gratitude to the Mayor and the City council for the adoption of the resolution on the recognition of the Artsakh Republic after the 2020 war, in defense of the people of Artsakh and their rights. The Ambassador also mentioned the dynamic and active patriotic activities of the Armenian community of Montpellier and Armenian organizations. In this context, she stressed the significant contribution of Professor Dedeyan in strengthening the cooperation between Armenia and Montpellier in recent decades.

“Montpellier has very strong ties with Armenia since the Middle Ages. It was one of the first cities in France to erect a monument in memory of the Armenian genocide. We wanted to reaffirm this link by naming the park near the town hall, Armenia Park,” Mayor Michaël Delafosse said.

“Montpellier is alongside Armenia to preserve the sovereignty of Artsakh. Our city has an alley named after the heroic Missak Manouchian, whose courage and commitment to France must be recognized by bringing him into the Pantheon,” he added.

The speeches were followed by a cultural program, during which poems by Yeghishe Charents, songs by Charles Aznavour and a number of other Armenian authors were performed by the children of the Montpellier Armenian Association School.

After the event, Ambassador Tolmajian made a note in Montpellier’s Golden Book.