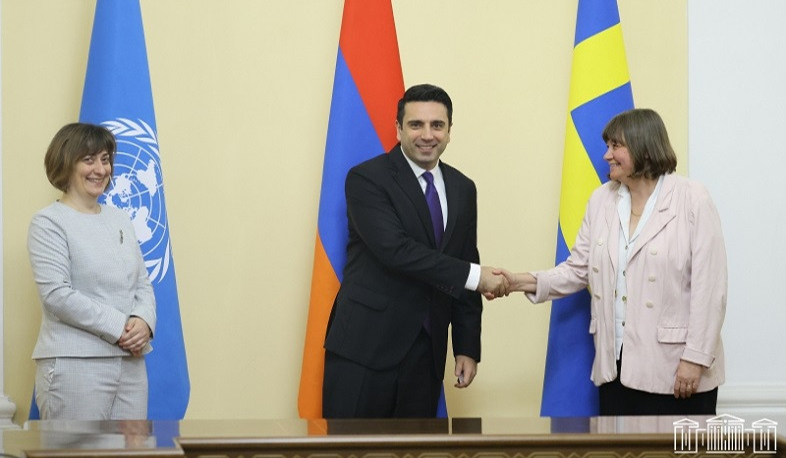 On May 16, the RA NA President Alen Simonyan gave an opening speech at the sitting of the UN Development (UNDP) ‘New Parliament for a Modern Armenia’ Project Council.

Welcoming the attendees, he highly appreciated the results of the cooperation within the framework of the Project, stressing that with the joint forces of the UNDP Project, the British and the Swedish Embassies and the UK Aid organization the prior problems were reviewed. Its regular solutions raise the benchmark for the parliamentary democracy culture.

As a visible and tangible outcome, Alen Simonyan singled out the adoption of the Criminal Code and the Criminal Procedure Code, the gender budgeting presented for the first time in the law on State Budget for 2022.

He also touched upon the Analytical and Training, the Parliamentary Democracy Centres created in the parliament within the framework of the Project.

Concluding his speech, the RA NA President has underlined that this Project is a key Project of the National Assembly.

The New Parliament for a Modern Armenia Project was revised for showing support to the National Assembly, keeping at the centre of attention the improvement of the parliamentary function quality, the transparency and inclusiveness.

The Project assists the development of the parliament capacities through the training, expertise and consultation.

The UNDP ‘New Parliament for a Modern Armenia’ Project is carried out by the OxYGen Foundation, the International Center for Human Development and the Westminster Foundation for Democracy in cooperation with the National Assembly. The Project is implemented with the financial assistance of the Good Governance Fund of the United Kingdom and the Government of Sweden.

The aim of the Project is to strengthen the legislative body of Armenia, to support the parliament in order to apply new tools and mechanisms in the state government system, which will promote the improvement of the work quality, providing the transparency and inclusiveness, the elaboration of the gender sensitive policies in consonance with the UN sustainable development goals and without ignoring anybody on the Global Agenda 2030.