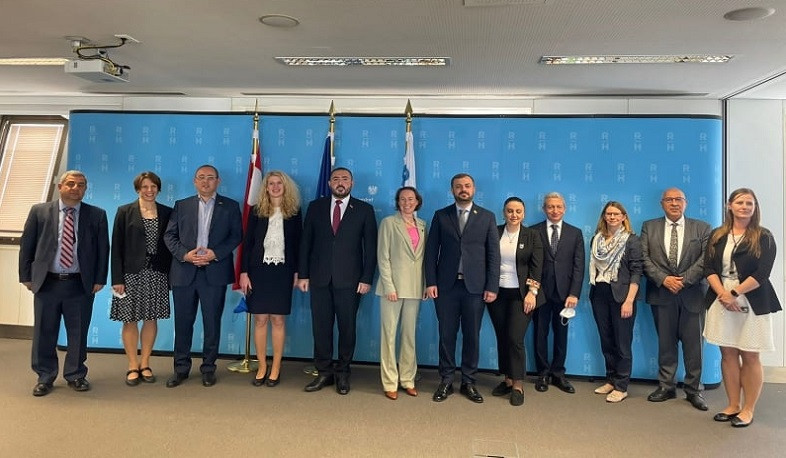 During the meeting of the RA NA Chief of Staff, Secretary General and the Secretary General of the Austrian Parliament the possibilities of cooperation, the exchange of experience and the perspectives of the capacity development between the staffs of the parliaments of Armenia and Austria were discussed.

On May 9-13, within the framework of the UNDP New Parliament for a Modern Armenia Project the Chief of Staff, Secretary General of the National Assembly of Armenia was in the parliament of the Republic of Austria on a cognitive visit.

He highlighted the use of the international best experience and invited the Secretary General of the Austrian Parliament Harald Dossi to the RA National Assembly. Vahan Naribekyan also met with the General Director of the Audit Department of the Staff of the Austrian Parliament Robert Sattler and the high ranking heads of the Audit Chamber. The approaches of the financial oversight, the budgetary process of the Staff and the effective distribution of the latter.

The Chief of Staff, Secretary General of the National Assembly of Armenia also met with the Head of the Democracy Education Department of the Austrian Parliamentary Administration Leopold Lugmayr and the Head of the Parliamentary Budget Office Helmut Berger. At the meeting the functions, the implemented programmes of the Democracy Education Department were presented, the importance of the Department in strengthening the connection between the parliament and the citizens and the elaboration of the educational programmes was underlined. The sides discussed the possibilities of cooperation within the framework of the UNDP New Parliament for a Modern Armenia Project and the exchange of experience in the elaboration and development of the educational programmes.