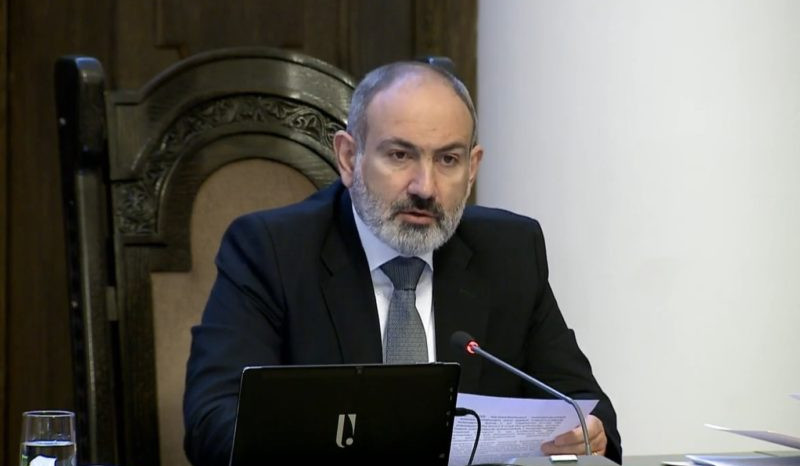 Before discussing the agenda, the Prime Minister touched upon the results of his official visit to the Russian Federation, the settlement of the Nagorno-Karabakh conflict, the activities of the OSCE Minsk Group, the opportunities for opening regional infrastructure and other related topics.

Below is the full transcript of the Prime Minister's speech.

"Dear participants of the Cabinet meeting,

The key issues of the bilateral agenda were discussed during the meetings, which is expressed in the joint statement of the President of the Russian Federation and the Prime Minister of the Republic of Armenia.


Naturally, we paid special attention to regional stability and security issues. We reached important agreements on the principles for opening regional communications, noting the affinity of the approaches of the Republic of Armenia and the Russian Federation. We can record that practically all our international partners have a common position on this issue. Against this background, I would like to reaffirm the readiness of the Republic of Armenia to start as soon as possible the construction of the railway and the road linking East and West passing through the territory of the Republic of Armenia. I hope that the trilateral working group on this issue, co-chaired by the Deputy Prime Ministers of the Russian Federation, Armenia and Azerbaijan, will be able to develop and agree on the necessary documents for starting the process in the near future.

The next result of the talks with the President of the Russian Federation was that we emphasized the importance of the international mandate of the OSCE Minsk Group Co-Chairs in the context of the settlement of the Nagorno-Karabakh conflict, with the political implications rising from this. And if we note that the Russian, French and American Co-chairs of the OSCE Minsk Group had visited Armenia before my visit to Moscow, we can say that the assessments on the dissolution of the OSCE Minsk Group Co-chairs’ format are baseless. We clearly see that all the Co-chairing countries remain committed to their mandate for the settlement of the Nagorno-Karabakh conflict, despite the fact that the developments in Ukraine have created difficulties for the Co-chairs to work together. But the fact that even in these conditions the Co-chairs act, visit the region, at the political level state their commitment to support the settlement of the Nagorno-Karabakh conflict, give a tangible basis for optimism.

I want you to know that I have informed the President of Nagorno-Karabakh about the content of my Moscow talks on the settlement of the Nagorno-Karabakh conflict. This practice is not new, I have always done this after the negotiations and discussions in Russia, Europe and Armenia. And the President of Artsakh, in turn, presented the results of those negotiations to the political elite of Artsakh. This practice will always continue.

Moreover, after each round of negotiations, I share detailed information with various political circles of Armenia, I have always shown readiness to share that content with the parliamentary opposition, but the latter always refuse from such discussions for obvious reasons: in order to be able to create legends about different conspiracy theories and build their activities based on those theories.

In particular, after November 9, 2020, before practically every my foreign visit, rumors spread from all possible sources that I am going to sign a document on the Nagorno-Karabakh settlement, by which Artsakh will be surrendered to Azerbaijan. I say in a responsible manner that during this period and at this moment there has been no and there is no plan for the settlement of Nagorno-Karabakh, pay attention, there is no plan or draft that is on the table or in circulation. I reiterate, there has never been such a plan or even a draft. I mean, after November 9, 2020.

As for surrendering Artsakh, apologizing a thousand times, I have to state that Artsakh is not an object to be surrendered or not. Artsakh is first of all the people living there. If we wanted to surrender Artsakh, we would not have spent tens of billions of drams after the 44-day war to ensure the return of the people of Artsakh to their homes. The one who wanted to surrender Artsakh, on the contrary, would simply not do anything after the war and the surrendering of Artsakh would, in fact, have become a reality.

On the contrary, we make unprecedented investments in Artsakh, because to keep Artsakh means to keep the people of Artsakh in Artsakh, to keep Armenia means to keep the people of Armenia in Armenia, and even to bring back those who have left. And this is not possible without peace. Without peace, dear colleagues, this is not possible.

And I don’t just say, I rule out, I just rule out that there can be a document that is more or less close to being signed, and that it will be signed without a wide public discussion, including with all segments of the Artsakh society. This is a guarantee, an iron guarantee that the fate of Artsakh cannot be decided behind the people's backs. In this regard, the skeptics cite the example of the trilateral statement of November 9, 2020, which was signed without a wide public debate. This is a strange comparison, because in the conditions of war, within hours, sometimes minutes, a decision had to be made to save the lives of thousands of people of Artsakh, 25,000 soldiers, to save Artsakh from the eviction of Armenians, these comparisons are simply not appropriate. But, on the other hand, all our policies and steps are aimed at not allowing situations to be forced to make a decision in such conditions.

The public is familiar with the content of all the papers that are the subject of the Armenian-Azerbaijani talks at the moment. These are the 5 points conveyed to us by Azerbaijan and our response to it, which, in fact, has been published in full during interviews and speeches. We will continue this practice in the future, as long as the ethics of diplomatic and interstate relations allow.

As for the speculations following my statements about international calls to lower the bar on the status of Nagorno-Karabakh, saying that no such calls have been made before, I have to express confusion by this fact, and here is why:

The proposals made by the OSCE Minsk Group Co-Chairs on the settlement of Nagorno-Karabakh in 2016 are nothing more than a document about lowering the bar, as the key meaning of that document was to postpone the status of Nagorno-Karabakh for an indefinite period. By saying indefinite period, by the way, it meant decades, if not more. Another manifestation of lowering of the bar in the 2016 proposals was the proposal to delegate the issue of determining the status of Nagorno-Karabakh to international bodies, by the way, to those bodies that had previously expressed their position on the issue within the framework of Azerbaijan's territorial integrity. The 1996 OSCE Lisbon Summit was such a call to lower the bar. Another such call to lower the bar was the idea of a "Common State" in 1999. Such a call to lower the bar was the Key West process of 2001, the Madrid Principles of 2007, on which the three proposals of January-July-August 2016 were based. The various documents adopted by various international bodies since the 1990s contained direct and indirect calls for lowering the bar.

In the short, medium and long term, our strategy is to provide a situation or a solution that will allow the people of Artsakh to live in Artsakh, and as I said during my speech at the parliament on April 14, they should live in Artsakh in a way to feel, consider themselves people of Karabakh, Artsakh, Armenians. Any solution to the Nagorno-Karabakh conflict or any situation established in Nagorno-Karabakh that not only will not provide but will not guarantee these conditions is not acceptable to us, it will never be acceptable.

This is the core of the question, dear colleagues, the rest, I am sorry, is a toast. And the forces that want the Armenian government to take toasts as a policy, as a result of which a new war will be unleashed, Armenians of Artsakh will be evicted, they have surrendered, they are surrendering and not only Artsakh, but also the Republic of Armenia. But we can be sure that we will not allow it. The people of Armenia will not allow that. We also will not allow any provocative statements aimed at distracting us from the peace agenda. We will not allow it because we are convinced that it is the peace agenda that will ensure the future of the Republic of Armenia and Artsakh.

Thank you. This is the prelude to our meeting today."