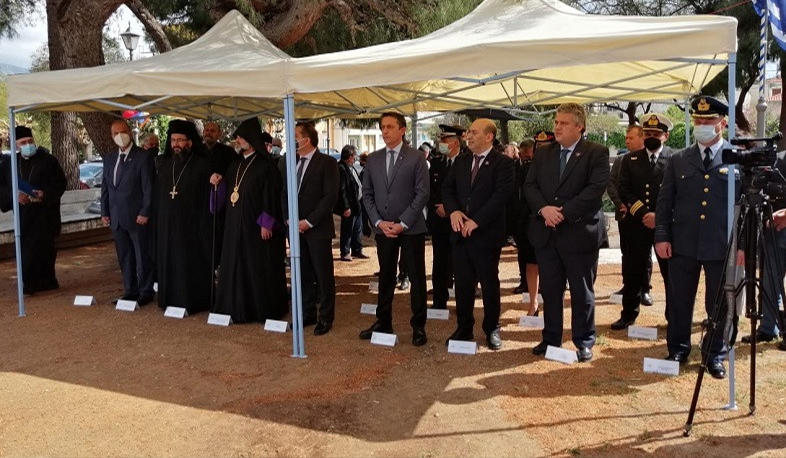 On April 18, Ambassador Extraordinary and Plenipotentiary of the Republic of Armenia to Greece Tigran Mkrtchyan paid a visit to Kalamata, Greece to participate in an event dedicated to the 107th anniversary of the Armenian Genocide organized by the Kalamata Municipality in cooperation with the Kalamata Union of Armenians. Archbishop Khacheryan, Mayor of Kalamata Athanasios Vasilopoulos, Member of the Greek Parliament Periklis Mandas, representatives of the Armenian community of Kalamata, Greece.

The Mayor of Kalamata, Athanasios Vasilopoulos, delivered a welcoming speech at the event. In his speech, Mayor Vasilopoulos noted that 107 years ago the Armenian Genocide remained in the center of attention of the international community, emphasizing the importance of commemorating innocent victims.

The Primate of the Armenian Diocese of Greece, His Grace Archbishop Gegham Khacheryan, delivered a welcoming speech, emphasizing that the Armenian Genocide 107 years ago was followed by the genocides of the Greeks and Assyrians of Pontus, the developments of Constantinople in 1955, the occupation of Cyprus in 1974 and  the invasion of Artsakh (Nagorno-Karabakh) by the Turkish-Azerbaijani tandem in 2020, as a result of which thousands of people were killed, churches and cultural monuments were destroyed.

In his welcoming speech, Greek MP Periklis Mandas noted that the Greek Parliament will continue to demand that the international community recognize the Armenian Genocide so that humanity does not face similar atrocities.

In his speech, the ambassador stressed that Greece is one of the unique countries where both big and small cities remember those days, honor the memory of innocent victims. In this context, Ambassador Mkrtchan stated that it is extremely important, as remembrance is an important step in the prevention of genocides. At the same time, the Ambassador stressed that Armenia, together with Greece, Cyprus and a number of other friendly countries, regularly drafts resolutions on genocide prevention at the UN Human Rights Council.