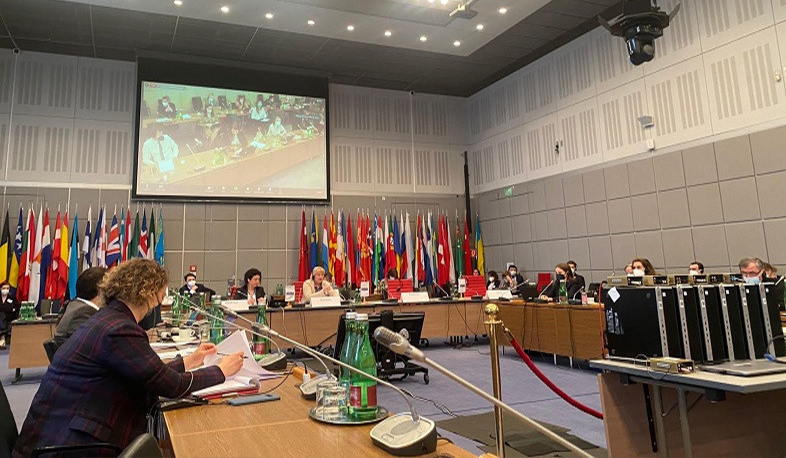 During the meeting, the representative of the Office of the Human Rights Defender made a speech, referring to the human rights and international humanitarian law violations by Azerbaijan during the Artsakh war, as well as the humanitarian crisis in Artsakh (Nagorno-Karabakh) as a result of the war.

The representative of the Office of the Human Rights Defender presented the violations of international humanitarian law against the border population of the Republic of Armenia by the Azerbaijani side, the human rights violations and the torture of prisoners of war by the Azerbaijani authorities, referring to the facts presented in the ad hoc reports of the Human Rights Defender.

In particular, the fact that the presence of the Azerbaijani armed forces has posed serious humanitarian problems to the border residents of Armenia was mentioned in the speech. Due to the behavior of the Azerbaijani authorities, which violate all well-known norms of international law, people in Artsakh have been deprived of gas supply for weeks, which disturbs the implementation of the latter's right to health, education, work, and other fundamental rights. The recent aggressive acts of Azerbaijan have caused not only social but also serious security issues.

The representative of the Office of the Human Rights Defender made a particular reference to the urgency of the need to return the prisoners of war and civilian captives still held in Azerbaijan.

During the speech, the criminal behavior of Azerbaijan was strongly condemned, and a call was made to national human rights institutions and international organizations to act to stop the genocidal policy against Azerbaijan. In their speech, the representative of the Office of the Human Rights Defender emphasized the importance of securing the presence of international organizations in conflict zones, both during and in the post-conflict periods, as a mechanism of guaranteeing and protecting the rights of the civilian population.