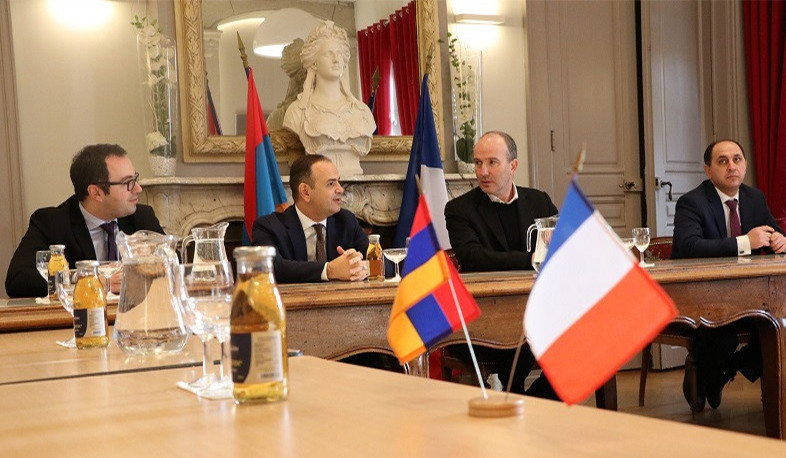 Diaspora can help Armenia in more ways than just economically and philanthropically: Zareh Sinanyan in France

In Vienne, High Commissioner Zareh Sinanyan met with Mayor Thierry Kovacs, Vice-Mayors Levon Sakounts and Hilda Dermidjian, and heads of Armenian organizations in the city. The High Commissioner presented the general plan for working with the Diaspora, noting that his visit is introductory and aims to start a meaningful dialogue with Armenians in France.

"We are working with the knowledge that the Diaspora can help Armenia in more ways than just economically and philanthropically. On the other hand, we must understand that the Diaspora has its own deeply-rooted issues and they need long-term solutions. I am glad to see that Armenian schools have been opened in France over the past 10 years," the High Commissioner said.

In his speech, Thierry Kovacs noted that Armenians are heavily involved in the city's development.

"This is a great example of integrating in France, as Armenians have become good citizens, but have also preserved their roots. Although I do not have Armenian roots, engaging with the community makes me feel a little Armenian. If we don't help Armenia, our freedoms may be at risk one day," the Mayor said. He also shared the city’s activities with twin city, Goris.

The High Commissioner emphasized the fact that the Mayor of Vienne visited Armenia and saw where the residents of his city come from and why they are the way they are. Then Thierry Kovacs organized a small tour of the city for his guests.

On the same day, the High Commissioner met with Vice-Mayors of Valence Véronique Pugeat and Armenian-born Nathalie Iliozer-Boyer. The Mayor expressed her gratitude for the presence of Armenians in the city. Ten percent of the city's 95,000 residents are Armenians.