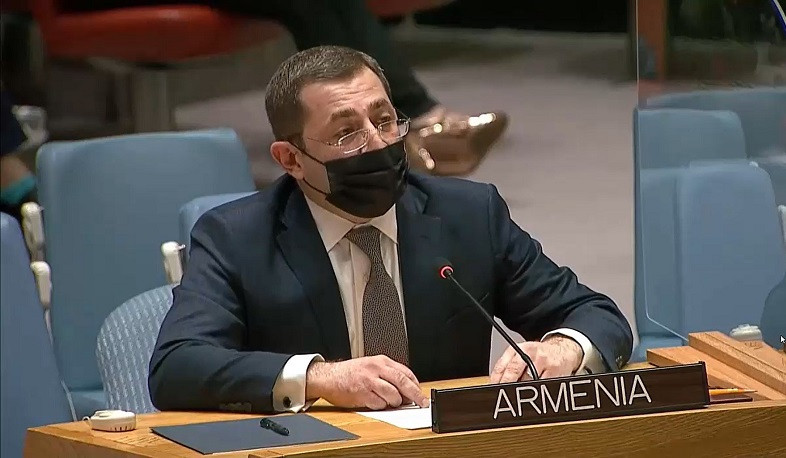 UN and international community should have ability and capacity to identify and address the situations of gross violations of International Humanitarian Law in Artsakh: Permanent Representative of Armenia to UN

Mher Margaryan, Permanent Representative of Armenia to the UN, at the UN Security Council open debate entitled ‘War in cities - protection of civilians in urban settings’ made a statement:

I would like to express my appreciation to Norway for placing protection of civilians among its Security Council presidency priorities. I thank Secretary-General António Guterres and President of the International Committee of the Red Cross, Peter Maurer for outlining the evolving challenges of protection of civilians in armed conflicts, in particular those trapped in conditions of urban warfare. The presence and the intervention of the Prime Minister of Norway during this debate today demonstrates the high importance and urgency related to the protection of civilians. I want to acknowledge Norway’s longstanding and historic record in humanitarian affairs.

In Armenia, we remember dearly the legacy of a great humanitarian - Fritdjof Nansen, whose name is often associated with the principles of humanity. The stateless persons’ documents, widely known as “Nansen passports” introduced by him as the High Commissioner for Refugees of the League of Nations were instrumental for the protection of civilians, in the aftermath of World War I, including tens of thousands of survivors of the Armenian Genocide.

Armed conflicts characterized by intense level of warfare with massive and targeted use of heavy weaponry and prohibited armaments turn densely populated areas, cities and settlements into zones of devastation. Placement of military installations and positions within or in close vicinity of residential neighborhoods poses a life threat to civilians, further compromising their safety and security.

In our region, we are faced with the consequences of brutal use of force by Azerbaijan against the people of Nagorno-Karabakh that claimed thousands of lives, brought devastation to civilians, destruction of residential buildings, hospitals, schools, churches and critical infrastructure.

The cities of Stepanakert, Shushi, Martakert, Martuni and Hadrut were targeted by multiple launch rocket systems, heavy artillery, UAVs and prohibited weapons, such as cluster munitions.

Launching a war in the middle of global pandemic, in gross violation of existing ceasefire agreement and the International Humanitarian Law, must be acknowledged for what it represents – a premeditated, carefully planned and executed attempt to inflict maximum causalities in full demonstration of an intent to destroy, in whole or in part, an ethnic group as such. No amount of distorted narrative or false justification for a military action can alter the truth and the facts on the ground.

Obstruction and politicization of safe and unhindered humanitarian access by the UN agencies to Nagorno-Karabakh has undermined the international efforts to conduct comprehensive assessment of the humanitarian situation, as well as that related to the protection and recovery needs and human rights of the affected population.

Armenia appreciates the unique role of the International Committee of the Red Cross in addressing the immediate life-saving needs of the population in Nagorno-Karabakh and channeling the urgent humanitarian assistance.

The activities of the Humanitarian Response Centre of the peacekeeping forces of the Russian Federation in Artsakh have been instrumental for providing vital assistance and services to the population, while conducting humanitarian demining and clearing residential areas and agricultural fields from thousands of unexploded ordnance and explosive objects.

Evolving methods of warfare and further sophistication of weapon systems necessitates stronger efforts by the international community to ensure full implementation of obligations under the Geneva Conventions and their Additional Protocols.

The United Nations and the international community should have the ability and capacity to identify and address the situations of gross violations of International Humanitarian Law and international human rights law, to ensure that people trapped in conflict situations are not left behind and have access to humanitarian assistance, in line with the principles of humanity, neutrality, impartiality and independence.

While we recognize that there might be inherent limitations in the working methods of international structures, allow me to conclude by emphasizing the need to be impartial, but not value neutral.

I thank you,” Margaryan said.