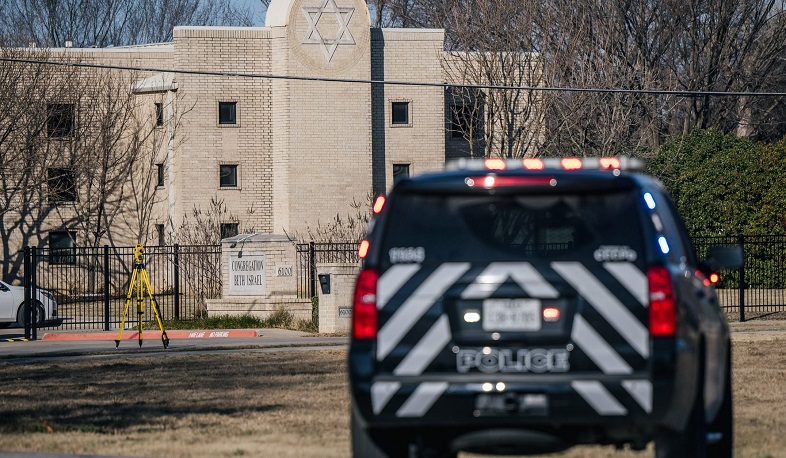 The FBI identified the gunman who held four people hostage at a synagogue in Texas on Saturday, leading to an hours-long standoff outside the Dallas-Fort Worth area, NBC News reports.
Malik Faisal Akram, 44, a British citizen, held the hostages against their will at the Congregation Beth Israel, a Reform synagogue in the city of Colleyville, according to Matthew DeSarno, the FBI's special agent in charge in Dallas.
Authorities said Akram died during the standoff Saturday night but did not offer further details. A spokesman for Britain’s Foreign, Commonwealth and Development Office said the agency was aware of "the death of a British man in Texas" but did not say whether he was referring to the suspect.
British Foreign Secretary Liz Truss issued a statement on Twitter on Sunday, saying her thoughts were "with the Jewish community and all those affected by the appalling act in Texas."
Describing the incident as an "act of terrorism and anti-Semitism," she said: "We stand with U.S. in defending the rights and freedoms of our citizens against those who spread hate."
Late Sunday, British authorities said that two people were being held in connection with the Texas standoff.
“Two teenagers were detained in South Manchester this evening,” Greater Manchester Police said in a statement. “They remain in custody for questioning.”
A senior law enforcement official told NBC News the teens are Akram's sons.
According to this official, Akram was in touch with his sons at some point during the situation on Saturday.
Police have not released the identities of the two teenagers detained.
The two were picked up by officers from a U.K. law enforcement group called Counter Terror Policing North West, the department said. They described the matter as part of an ongoing investigation in England.
The FBI’s Evidence Response Team is processing evidence at the synagogue, DeSarno said in a statement earlier Sunday. “At this time, there is no indication that other individuals are involved," the statement said.
In a statement late Sunday, the FBI said it's always focused on extremist threats to the Jewish community, other religious groups, and people of color.
"This is a terrorism-related matter, in which the Jewish community was targeted, and is being investigated by the Joint Terrorism Task Force," the bureau said.
"Preventing acts of terrorism and violence is the number one priority of the FBI," it said.
During the nearly 10-hour hostage situation, Akram demanded the release of Aafia Siddiqui, according to three senior law enforcement officials briefed on the situation.
Views 40