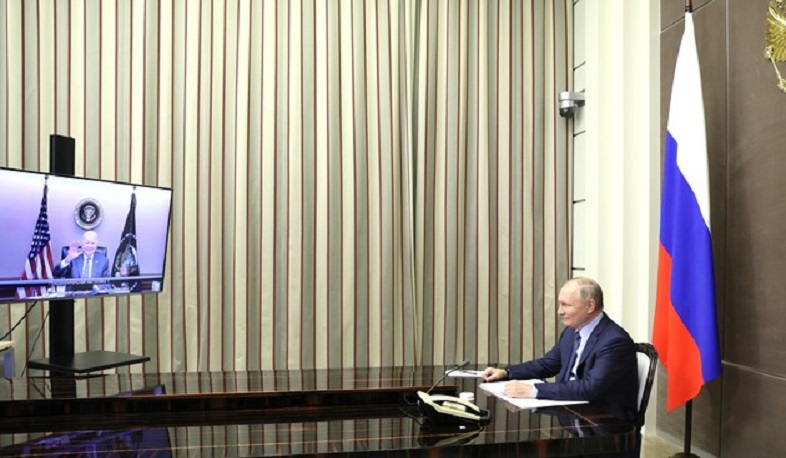 The presidents of Russia and the United States, Vladimir Putin and Joe Biden, agreed about ‘detailed consultations’ on sensitive security issues, the Kremlin press service said after the two-hour talks in the video conference format.

The issue of Ukraine dominated the talks. Besides, the presidents discussed the implementation of the Geneva summit decisions, the dialogue on cybersecurity and bilateral issues, including the functioning of diplomatic missions. TASS gathered main points that are known about the conversation.

According to the Kremlin, the talks mainly centered around topics related to the Ukrainian crisis and the lack of progress in the implementation of the 2015 Minsk agreements that remain the only basis for peace settlement in that country.

Biden, in turn, pointed to the allegedly threatening movements of Russian troops near the border with Ukraine and outlined possible sanctions the United States and its allies would be ready to impose in case of further escalation, the Kremlin said.

In response, the Russian President has called for not shifting responsibility for the escalation of the situation around Ukraine on Russia. The country is interested in having secure, legally fixed guarantees that would exclude NATO’s eastwards expansion and deployment of its offensive weapons systems in Russia’s neighboring countries.

The leaders agreed that they would task their representatives with launching "substantive consultations on these sensitive issues."

During the conversation, it was stated that the cooperation between Washington and Moscow "remains unsatisfactory," including due to difficulties that are experienced by the downsized diplomatic missions of the two countries in their work.

Putin underscored that all that is a consequence of the course of the US government that as long as five years ago started to practice large-scale restrictions, bans and massive expulsions of Russian diplomats, which prompted our tit-for-tat responses. The Russian side proposed to cancel all the existing restrictions on the functioning of the diplomatic missions, which could help to normalize other aspects of bilateral relations.

The two leaders also noted the importance of consistent implementation of decisions made during the June 2021 Geneva summit, and of preserving the ‘spirit of Geneva’ while considering bilateral issues and other problems that emerge in Russian-US relations.

The leaders also recalled the two states’ allied relations during World War II, which should serve as a model for present-day work.

Putin and Biden stressed the importance of the cyber security dialogue and said they were ready to continue practical cooperation in fighting cyber crime.

The leaders also expressed hope that the talks on Iran’s nuclear deal, which resumed in Vienna in late November, will be constructive and pave the way for solutions acceptable for everyone.

The Kremlin gave a detailed account of the talks, stressing their "candid and businesslike nature." The White House, however, published a brief statement of five sentences.

According to the US administration, Biden voiced his country’s "deep concerns" about the buildup of Russian forces near the border with Ukraine and made clear that the US and its allies would respond with "strong economic and other measures." He also called for "a return to diplomacy."

The two presidents tasked their teams to follow up, and the US will do so "in close coordination with allies and partners."

Putin and Biden "also discussed the US-Russia dialogue on strategic stability, a separate dialogue on ransomware, as well as joint work on regional issues such as Iran," according to the White House.