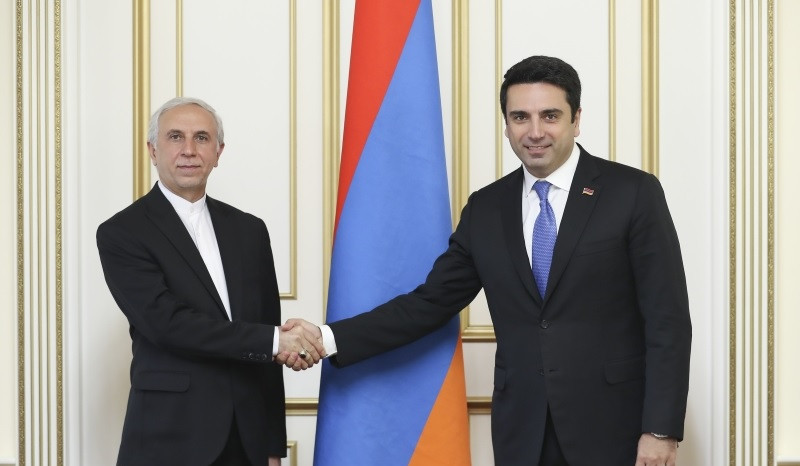 During meeting with Iranian Ambassador, Armenia’s Parliament Speaker referred to work on resolving situation near Vorotan

On September 16, the President of the RA National Assembly Alen Simonyan received the Ambassador Extraordinary and Plenipotentiary of the Islamic Republic of Iran (IRI) to the RA Abbas Badakhshan Zohouri.

Welcoming the guest, the NA President has underlined that the relations with Iran are of strategic importance for Armenia. He has noted that the centuries-old friendship and the two peoples’ peace loving attitude serve as a unique bridge between the Republic of Armenia and Iran. The active political dialogue formed as a result of Armenia-Iran collaboration is considered to be as a firm basis and guarantee in all spheres for continuous development and strengthening of the inter-state cooperation.

Alen Simonyan has underscored that our country seeks to maintain and to further strengthen the continuous growth for the dialogue of the political and economic fields and the trade cooperation. In this aspect, the Head of Parliament drew attention especially to the fact that during 2020, despite the spread of COVID-19 and its negative consequences, the Armenian-Iranian trade turnover had not undergone the most serious changes, and the export even had grown to some extent.

Alen Simonyan also noticed that the indices of the Iranian investments in Armenia and the Armenian investments in Iran affirm that the potential of the Armenian-Iranian trade-economic relations is not realized with its entire volume. In the viewpoint of the Armenian side Iran is a reliable friend and a good neighbor. Alen Simonyan highlighted the Armenian-Iranian interaction in the development of the regional strategic infrastructures, as well as in the regional military-political security issues. The works for the solution of the situation in the vicinity of Vorotan settlement of Goris-Kapan inter-state road were touched upon.

Thanking the NA President for the reception, the Ambassador has documented that the role of the Armenian cultural heritage is considerable in the Iranians’ life, and the Armenian community is rather active and inclusive is presented Iran.

The sides referred to the role of the inter-parliamentary cooperation in strengthening of bilateral mutually beneficial cooperation bases. In this context the activity of the parliamentary friendship groups was emphasized.