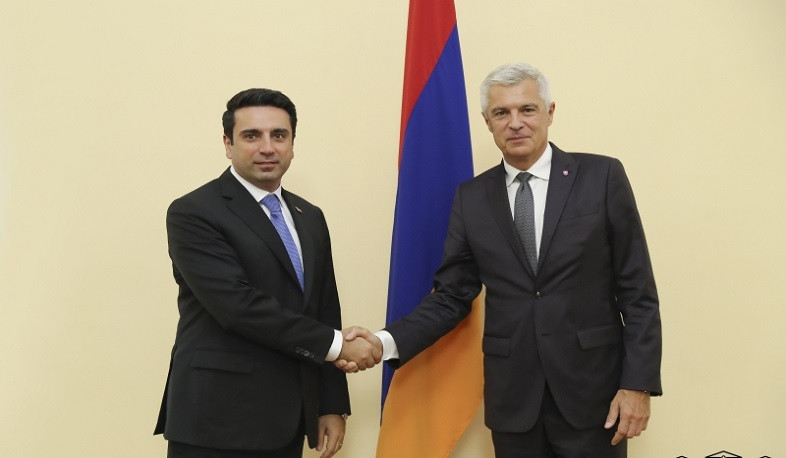 On September 14, the NA President of the Republic of Armenia Alen Simonyan received the delegation led by the Minister of Foreign and European Affairs of the Slovak Republic Ivan Korčok.

Welcoming the guests, the NA President has noted that Slovakia is one of the important partners of Armenia in Europe, and Armenia attaches great importance to the sustainable development of the friendly relations with Slovakia.

Alen Simonyan reaffirmed the necessity of cooperating in all spheres. In this context, he especially stressed the activities of the Embassy of Slovakia opened in 2020 on continuous ensuring of political dialogue and effective cooperation in different fields.

According to the Head of Parliament, the role of the parliamentary diplomacy is rather comprehensive on the bilateral agenda, and soon Armenia-Slovakia Parliamentary Friendship Group would be re-formed in the National Assembly of the eighth convocation. Alen Simonyan informed that he invited the President of the National Council of the Slovak Republic Boris Kollár to pay an official visit to the Republic of Armenia for maintaining the active cooperation between parliaments and deepening it.

He highly evaluated the adoption of the resolutions on the Conflict Being Continued in the Nagorno-Karabakh and on Nagorno-Karabakh. The NA President has underlined that at this moment the issue of the immediate repatriation of Armenian prisoners of war and civilians detained in Azerbaijan is of priority, on which Armenia expects the support of the international community.

The Minister of Foreign and European Affairs of the Slovak Republic Ivan Korčok thanked Alen Simonyan for the reception, informing him that this is his first visit to Armenia. He reaffirmed that the solution of the Nagorno-Karabakh through peaceful means has no alternative.

Touching upon the snap parliamentary elections, the guest highlighted their results, expressing conviction that they confirm once again the values of democracy adopted by Armenia.

The sides referred to the perspectives of deepening also Armenia-Slovakia cooperation within the frameworks of the RA-EU Comprehensive and Enhanced Partnership Agreement.

At the end of the meeting opinions were exchanged over the necessity of the joint agendas’ elaboration.