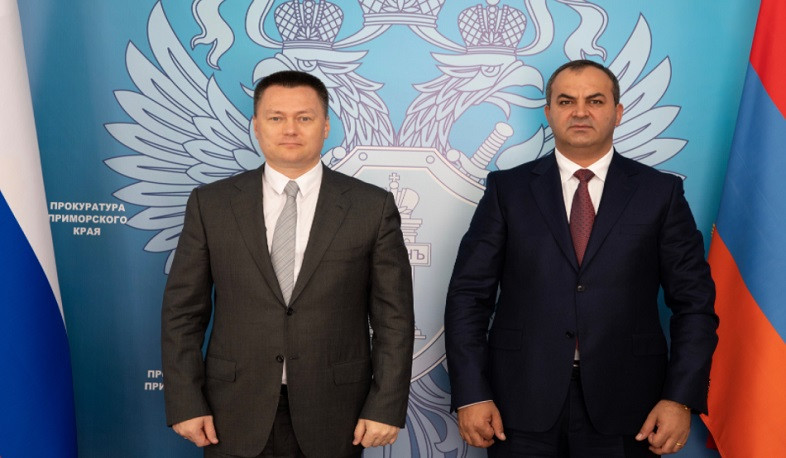 The prosecutor generals of the two countries discussed the process and results of the cooperation between their offices, as well as issues on raising the efficiency of mutual communication.

Davtyan thanked the Russian side for the invitation to participate in the 6th Eastern Economic Conference, expressing confidence that such events contribute to investments in economies and use of more practical mechanisms for protection of rights of investors.

During the meeting, they touched upon the issues of combining efforts in the fight against transnational crime, protection of the rights of citizens of the two countries in the criminal sphere, closer cooperation in the field of crime detection, implementation of measures envisaged by the Memorandum of Cooperation signed between the prosecutors of the two countries.

Both sides highly valued the frequency of meetings between the Prosecutor Generals, which, they said, gives a new impetus to strengthening the practice of operational solving of ongoing issues, raising the mutual trust level between their offices.

The meeting also focused on issues relating to ensuring peace, stability and security in the region after the 2020 Artsakh War.

Davtyan thanked the Russian side for its peacekeeping mission in Artsakh, for ensuring the security of more sensitive sections of the borders of Armenia. He drew the attention of his Russian counterpart on the destabilization actions of Azerbaijan.

The necessity of implementing the requirements of the 2020 November trilateral statement, in particular those relating to the return of Armenian servicemen and other civilians who are illegally held in Azerbaijan, was discussed at the meeting.