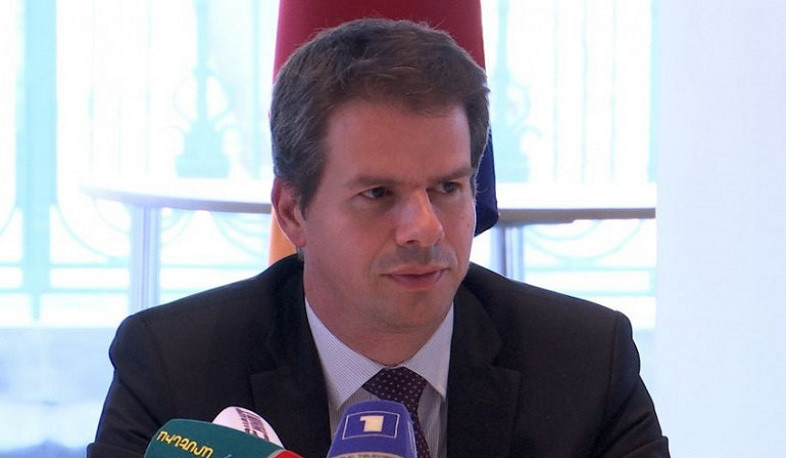 Status of Nagorno-Karabakh must be determined through negotiations within framework of OSCE Minsk Group: Jonathan Lacôte

Ambassador Extraordinary and Plenipotentiary of France to Armenia Jonathan Lacôte referred to the Artsakh (Nagorno-Karabakh) conflict in an interview with ‘Azatutyun’ (RFE/RL Armenian Service).

“There is a reality that the status of Nagorno-Karabakh must be determined through negotiations within the framework of the OSCE Minsk Group. Until that status is determined, neither the French ambassador to Baku nor the French ambassador to Yerevan can visit Karabakh. In Baku, my colleague does not visit Shushi, just as I do not visit Stepanakert. And this is a position used by the three Minsk Group co-chair countries. Meanwhile, France supports a wider international presence in Karabakh. Now only the International Committee of the Red Cross is present there and is doing an excellent job. We believe that UN agencies must also be present in Nagorno-Karabakh,” he said.

According to the French ambassador, a number of issues remained open as a result of the conflict. He particularly stressed the issue of prisoners of war (POWs).

“POWs who are still being held in Azerbaijan. The new border of several hundred kilometers, which now exists between the two countries. And the Karabakh issue in general. We see that these issues are not solved. Therefore, we are in favor of starting a political process between Armenia and Azerbaijan. A process that the Minsk Group Co-Chairs are meant to accompany. The best guarantee of security for Armenia and the region is the negotiated settlement of these various points. At present, OSCE Minsk Group is the only body recognized by all parties to address these issues,” Lacotte said.

The French Ambassador referred to the statements of the Azerbaijani side on, the so-called, ‘Zangezur Corridor’.

“I think the expression 'corridor' should be removed. The ‘corridors’ have left a very bad memory in the history of diplomacy, such as the Danzig corridor. We believe that we should work on the basis of the trilateral statement of January 11, signed between Russia, Armenia and Azerbaijan, which envisages the restoration of regional channels of communication between the countries of the region and their neighbors. France is fully prepared to work with the countries of the region to launch the region’s transport infrastructure,” he said.