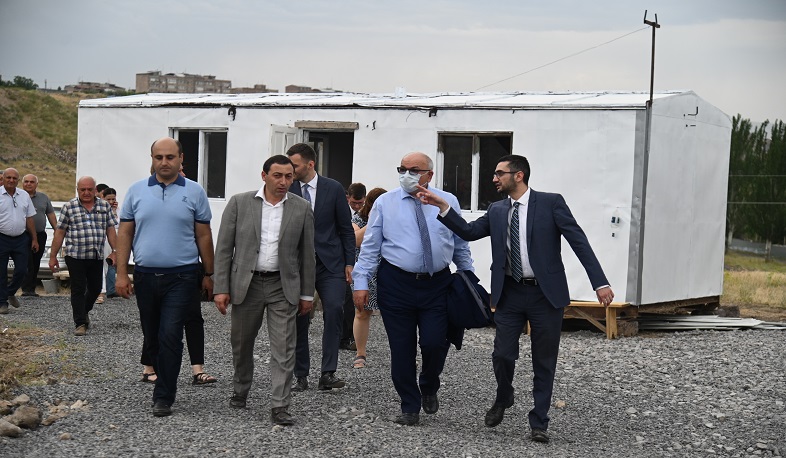 Construction of a new shelter for asylum-seekers launched

The ceremony of launching the construction of a new temporary shelter for asylum-seekers took place in Abovyan city, Kotayk province, as reported by the Migration Service of the Republic of Armenia (RA) Ministry of Territorial Administration and Infrastructure (MTAI).

The program is implemented in collaboration with the International Center for Migration Policy Development (ICMPD) and the Migration Service of the RA MTAI, with international donor funding. The total budget of the project amounts to 1,358,000 Euros, allocated by the governments of Denmark, Netherlands and the Federal Republic of Germany. On this occasion, Nicolai Ruge, Ambassador-at-Large for Migration, Denmark, and Anders Schlütter-Hvelplund, Head of Section at the Ministry of Immigration and Integration, Denmark, have arrived in Armenia and visited the office of the Migration Service, as well.

Armen Ghazaryan, the Head of the Migration Service, expressed his gratitude for participating in the construction of a temporary shelter and mentioned that even in times of pandemic the number of asylum-seekers in Armenia declined only slightly, therefore, the need for a new shelter with greater capacity was further emphasized. In addition, A. Ghazaryan addressed the agenda of institutional reforms in migration sector in Armenia and concurrent activities, which will also have a positive impact on the improvement of the asylum system at large.

Ambassador Ruge acknowledged the reforms in the migration area in Armenia, including the efforts exerted towards the construction of a shelter for asylum-seekers. In his words, Denmark is currently taking some measures to prevent irregular migration to their country, while supporting and collaborating with other countries.

The new shelter, designed for 100-120 asylum-seekers, will be ready by mid-2022, as assured by the construction company. The launching ceremony was attended by Vache Terteryan, Deputy Minister of RA MTAI, who expressed appreciation for the investment by international partners aimed at improving this sector. Mr. Nicolaas Schermers, the Ambassador of the Kingdom of Netherlands to Armenia, expressed satisfaction with his country’s participation in the project. A. Ghazaryan, Head of Migration Service, underlined that this initiative contributed to the alignment of the living conditions of asylum-seekers in Armenia with international standards, while improving the quality of compliance by Armenia in fulfilling its commitments assumed under the 1951 Refugee Convention.

The project is implemented within the framework of migration and border management programme portfolio implemented by ICMPD.