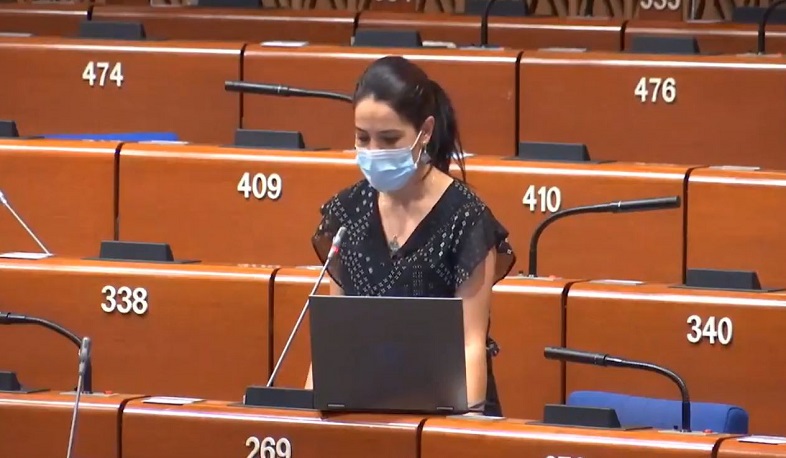 While the world was fighting against pandemic, children in Artsakh were hiding in shelters: Hayrapetyan

Tatevik Hayrapetyan, member of My Step faction of Armenia’s National Assembly, member of the Armenian delegation to PACE, addressed the Parliamentary Assembly of the Council of Europe, referring to the Azerbaijani aggression and its consequences.

“While the world was fighting against the pandemic, children in Artsakh (Nagorno-Karabakh) were hiding in shelters. One of them, 8-year-old Mary, says. “I was lucky that it was Sunday, otherwise we would have gone to school, it would have been very bad ... because if we had gone to school, we would hardly have survived ...”

As a result of the Azerbaijani aggression, which was clearly supported by Turkey, many of the wounded needed medical attention, which put the health care systems of Armenia and Artsakh under unprecedented pressure,” said Hayrapetyan.

According to Hayrapetyan, this forced the COVID-19 treatment centers to transform and adapt to the new situation.

“In Nagorno-Karabakh, which has a population of 150,000, before the attack on Azerbaijan, 300 patients were treated with Covid-19, but due to numerous destructions and deportations, it became impossible to have statistics on the pandemic in the future. In addition, the presence of large numbers of people in shelters made the spread of the disease uncontrollable. In accordance with Paragraph 77, Protocol No. 1 to the Geneva Conventions, “Children enjoy special respect, are protected from all forms of obscenity ...”, but this did not apply at all during the 44-day war in Artsakh,” said Hayrapetyan.

Hayrapetyan noted that the children suffered not only physically but also mentally as a result of the war.

“Many of them lost their parents, their homes, their normal lives, and they were forced to look into the eyes of death. Let me present a short statistic. As a result of the Azerbaijani aggression, 71 schools and 14 kindergartens were destroyed in Artsakh. As a result of the aggression accompanied by the pandemic, more than 8,000 students were deprived of the right to education. Thus, the aggression accompanied by the pandemic has destroyed the lives of many children living in Artsakh, Armenia, creating many health and psychological problems for the rest of their lives,” said Hayrapetyan.