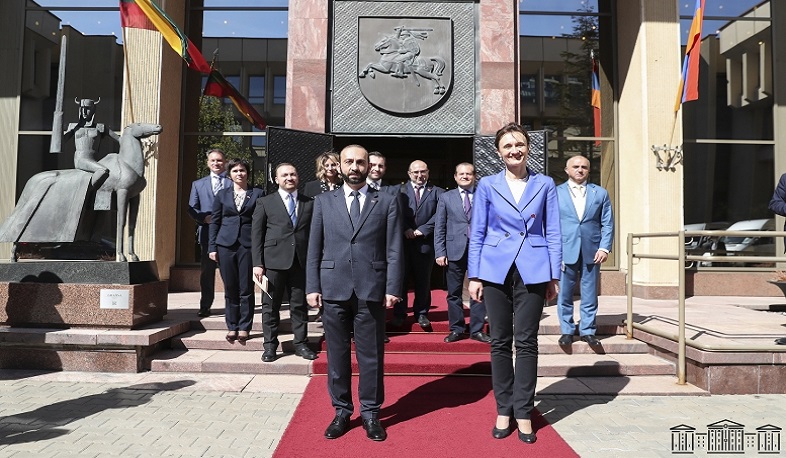 On May 11, within the framework of the official visit to the Republic of Lithuania, the delegation led by Speaker of Armenia’s National Assembly Ararat Mirzoyan met with Speaker of the Lithuanian Seimas Viktorija Čmilytė-Nielsen and the Lithuanian parliamentarians.

Welcoming the Speaker of the National Assembly, the Speaker of the Lithuanian Parliament noted that she was very pleased to host the Armenian delegation, emphasizing that this year marks the 30-th anniversary of the establishment of diplomatic relations between Armenia and Lithuania. Viktorija Čmilytė-Nielsen praised the bilateral relations established between the two countries over the years, emphasizing the role of active cooperation between the two parliaments, particularly, the parliamentary friendship groups.

Speaking about the current situation around Nagorno-Karabakh, Mirzoyan stated that Azerbaijan continues to grossly violate the November 9 trilateral statement by refusing to return Armenian prisoners of war (POWs) and other detainees. In addition, the Azerbaijani government continues its policy of Armenophobia, which once again proves that the Armenians of Artsakh cannot live safely in that country.

The Speaker of the Seimas noted that Lithuania continues to express concern over the process of return of POWs and the encroachments on the Armenian cultural heritage by Azerbaijan.

During the meeting, the parties discussed a number of issues of mutual interest, among which Mirzoyan informed his colleagues about the forthcoming snap parliamentary elections in Armenia and invited them to carry out an observation mission in Armenia those days.