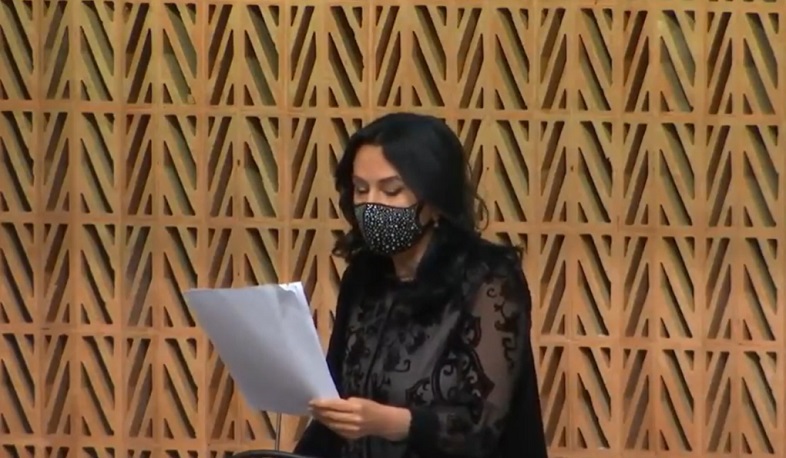 Naira Zohrabyan, member of ‘Prosperous Armenia’ faction of the Armenian National Assembly and a member of the Armenian delegation to the Parliamentary Assembly of the Council of Europe (PACE), addressed PACE, referring to the issue of Armenian prisoners of war (POWs) being held in Azerbaijan.

“Today we are discussing a very important report - the priorities of our structure and the strategy.

It is a fact that in recent years the Council of Europe and our Assembly have undergone many strange transformations in outlining their priorities.

It is at least puzzling to me that the Council of Europe, which seems to have become an anti-Russian club, chooses the issue of Russian opposition leader Alexei Navalny as an urgent topic on all its recent agendas. Whereas, what is happening in the 21-st century in some Council of Europe member states is simply appalling. A few days ago, an exhibition unprecedented in its cynicism was opened in Baku, an exhibition of military booty confiscated from the Armenians side in the recent Artsakh war. One had to see how Aliyev proudly walked through the helmets of the killed Armenian soldiers, one had to see how the Azerbaijani children had fun suffocating the mannequins of the Armenian soldiers.

The issue of that fascist exhibition in Baku was to become one of the priority issues today.

It was horrible to see Azerbaijanis queue for miles to see this insulting exhibition. They brought their children with them, declaring that Armenians were their genetic enemy.

Dear Colleagues, It is good that today our Assembly will finally discuss the issue of Armenian POWs.

Six months after the war, we have hundreds of POWs being held in Azerbaijani prisons. Azerbaijan not only refuses to provide the European Court of Human Rights with clear information about Armenian POWs, but also cynically declares that they are not POWs. By the way, one of the POWs was recently buried by his parents. I want to understand why the Council of Europe Commissioner for Human Rights has not yet visited Baku prisons to see the inhumane conditions in which Armenian POWs are being held.

Dear colleagues, when the member states of the Council of Europe, Azerbaijan and Turkey, are most cynically violating human rights, when Aliyev declares that they won this war, because they raised a whole generation of Azerbaijani youth with hatred for the enemy, here are such racist, anti-Armenian statements. They should be the subject of discussion of our structure, otherwise we violate the basic values ​​of our structure with fake agendas,” Zohrabyan said in her speech.