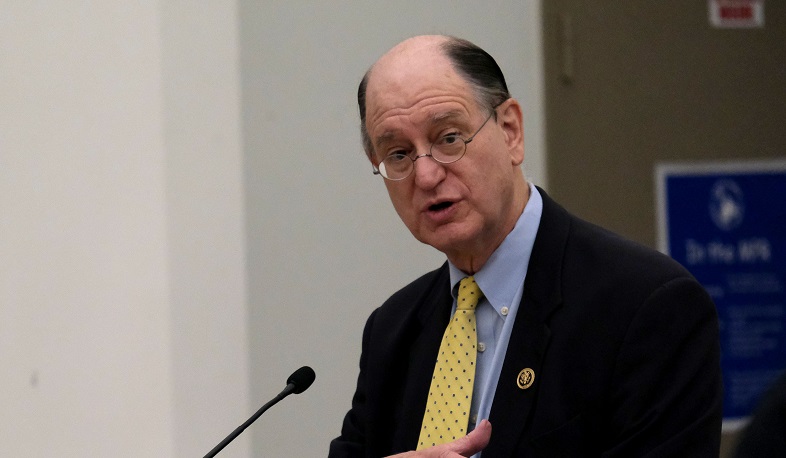 The government of Azerbaijan must be held accountable by the international community: Brad-Sherman

Congressman Congressman Brad Sherman - a senior member of the House Foreign Affairs Committee - powerfully condemns and passionately commemorates the Sumgait, Kirovabad, and Baku Massacres.
Full text of March 8, 2021 Congressional Record Statement:
I stand in solidarity with the Armenian American community in commemorating the pogroms against Armenians in the cities of Sumgait (February 27-29, 1988), Kirovabad (November 21-27, 1988) and Baku (January 13-19, 1990).
Thirty-three years ago, in the Azerbaijani town of Sumgait, peaceful Armenian residents were brutally targeted on the basis of their ethnicity and subjected to unspeakable crimes. The New York Times reported Armenians being “hunted” down and an account of a pregnant Armenian woman, who had been disemboweled. The U.S. Senate passed an amendment in July of 1989, noting that even the Soviet government had termed the murder of Armenians in Sumgait a “pogrom.”
The Sumgait Pogroms were the beginning of an escalation of violence against the Armenian minority, with a wave of anti-Armenian violence spreading to Kirovabad in November 1988 and to Baku in January 1990, which culminated in the forcible expulsion of 390,000 Armenians from Azerbaijan and the 1991-94 war over Artsakh (Nagorno Karabakh).
In response to the Sumgait and Kirovabad pogroms, over 100 leading academics and human rights advocates, including the Executive Director of the NAACP and Elie Wiesel, placed an advertisement in The New York Times titled: "An Open Letter to International Public Opinion on Anti-Armenian Pogroms in the Soviet Union." The letter appealed to the international community to condemn the atrocities and prevent further violence by stating: “The international community of states . . . must prove the authenticity of its commitment to human rights in order to ensure that, due to indifference and silence bordering on complicity, another genocide does not occur.” (July 27, 1990, The New York Times)
Unfortunately, Azeri attacks against Armenian civilians have only continued. In its latest bout of aggression against Armenia and Artsakh in the fall of 2020, Azerbaijan carried out indiscriminate attacks against civilians. A report by Human Rights Watch found that Azeri forces used inherently indiscriminate cluster munitions and artillery rockets or other weapons that did not distinguish between military targets and civilian objects. Multiple strikes hit residential homes in less than a minute, suggesting bombardment of civilian areas.
Today, Armenians are still held captive in Azerbaijan, with no planned date to be returned to Armenia. Armenian prisoners of war have been subjected to physical beatings and other inhumane treatment at the hand of Azerbaijan. The government of Azerbaijan must be held accountable by the international community, and I will continue to work in Congress to shed light on and learn the lessons of such past and present atrocities.
Views 548