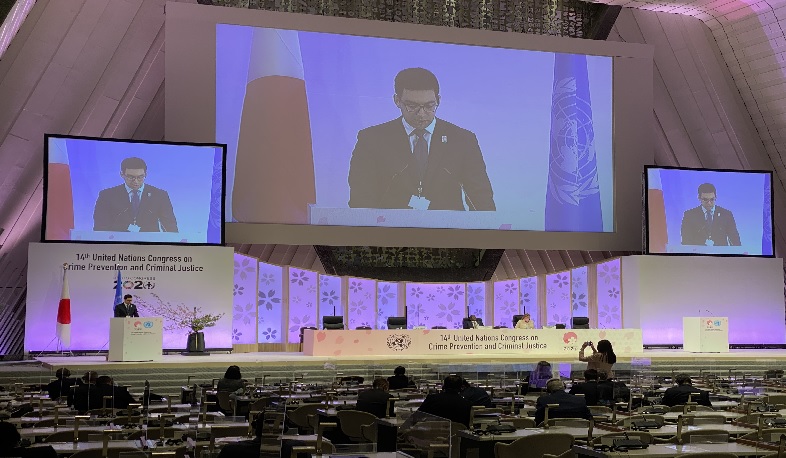 Rustam Badasyan, Minister of Justice of Armenia, touched upon the issues on war crimes committed in Artsakh by Azerbaijan, during his speech in Kyoto, Japan at the 14th UN Congress on Crime Prevention and Criminal Justice.
In his speech, Minister Badasyan thanked Japan and UNODC commissions for organizing the event and noted that this UN platform is a good opportunity for governments to discuss the issues of crime prevention, criminal justice, as well as the introduction of necessary mechanisms and tools.
Minister noted, since the Velvet Revolution in 2018, Armenia has embarked on an ambitious reform agenda with new determination and has made significant progress in promoting a culture of legality, crime prevention and improving the legal framework for criminal justice.
Badasyan specifically touched upon the issues of hate speech and noted that this issue is urgent for Armenia, because throughout history, Armenian people have been victims of discrimination, persecution, hate crimes and genocide due to intolerance towards their ethnic, religious and cultural identity.
“In this context, the Armenian delegation initiated the inclusion of a separate paragraph on hate crime in Kyoto Protocol,” Rustam Badasyan said, adding that crimes based on hatred and identity are the first steps that can lead to serious crimes against humanity, including war crimes and ethnic cleansing.
“I believe that impunity for past crimes, their justification and denial pave the way for a resurgence of violence and new atrocities,” the Minister of Justice of Armenia stressed, presenting as a clear example the consequences of the Turkish-Azerbaijani aggression in the Nagorno-Karabakh conflict zone in September 2020 - the involvement of terrorists from Libya and Syria to fight against Armenians. He emphasized that, as in the early 1990s, the reasons for the first war in Nagorno-Karabakh were due to hatred, discrimination, and denial of fundamental human rights towards Armenians.
“Azerbaijan's anti-Armenian policy, promoted for decades, has found its most inhuman expression during the recent aggression against the people of Artsakh that was accompanied by war crimes against humanity. The most notable examples of such crimes are the use of cluster munitions against civilians, targeting and destroying of Armenian cultural heritage, use of prohibited phosphorus ammunition against the forcibly displaced population sheltered in the forests, causing enormous damage to both humanity and the environment”, Rustam Badasyan said, citing as another evidence Azerbaijan's attempts to grossly violate the UN Convention relative to the Treatment of Prisoners of War - refusal to return Armenian POWs and other captives, including women.
“Recruitment of foreign terrorists and their further deployment by Turkey in the ranks of the Azerbaijani Armed Forces for military operations against Artsakh, is another serious crime committed by Azerbaijan and Turkey in gross violation of all international norms. Numerous pieces of evidence from relevant sources show that Turkey and Azerbaijan support and contribute to the increase and spread of the terrorist threat in our region. Therefore, we believe that the international community should join efforts to counter this threat and bring the supporters and perpetrators of this crime to justice”, stated Rustam Badasyan and, in that context, welcomed the fact of Kyoto Protocol referring to the crime of terrorism.
The 14th UN Congress on Crime Prevention and Criminal Justice started on March 7 and will be held up to 12 March, 2021.
Views 2244