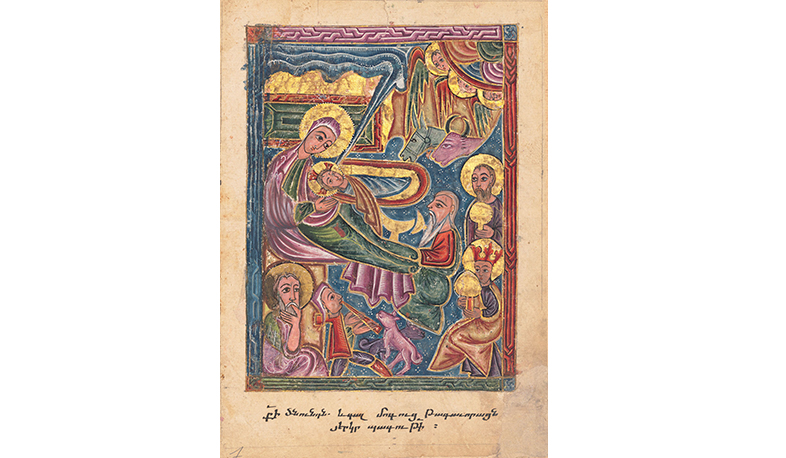 The world-famous Getty Art Museum in California has acquired two valuable Armenian manuscripts, which have been extensively published. Below is an excerpt from that publication.

“This recently acquired leaf from a 17th-century Armenian manuscript shows the Christian story of the miraculous arrival of the Christ child on earth. In the early 20th century, the leaf was cut out of its original book, likely by an art dealer. However, we are now able to reunite it with the parent volume and a second detached leaf, which have been in Getty’s collection since 1983, and gain a renewed understanding of the manuscript as a whole.

Along with an Armenian manuscript from the 16th century, this leaf arrived to the Getty manuscript department last winter as part of the department’s continued efforts to extend the bounds of the collection beyond western Europe. Together, these two new acquisitions bring Getty’s Armenian manuscripts collection to seven. They allow us to tell richer stories in our exhibitions and to present a more complete history of Armenian illumination.

The 16th-century Armenian book was illuminated by a brother and sister team, Ghoukas and Eghisabet, who are named in the manuscript. Eghisabet is only the second known female illuminator to be featured in our collection. The manuscript is a Gospel book, containing the four Gospels of the Christian Bible. Gospel books were among the most precious and revered manuscripts in medieval Armenia because of their sacred nature and their use during church services.

This Gospel book opens with a cycle of twenty full-page illuminations showing scenes from Christian sacred history. Each of the four books of the Gospel begins with a portrait of an Evangelist, and, throughout the manuscript, numerous smaller decorative motifs highlight divisions in the text. An inscription at the end of the volume—conventional in Armenian manuscripts—names the patron, Mirza Djan; the artists, Ghoukas and Eghisabet; and the scribes, Mik’ayel and Ohannes. It also says that it was written in 1583 for a monastery in the borough of Karbi, which is in modern Armenia.

This manuscript allows us to look more broadly at how Armenian illumination developed across time. It offers a visual link between the Getty’s two other Armenian Gospel books, one from the 14th century, and one from the 17th century. Both of these manuscripts have or formerly had a decorative cycle similar to that of the new manuscript”.