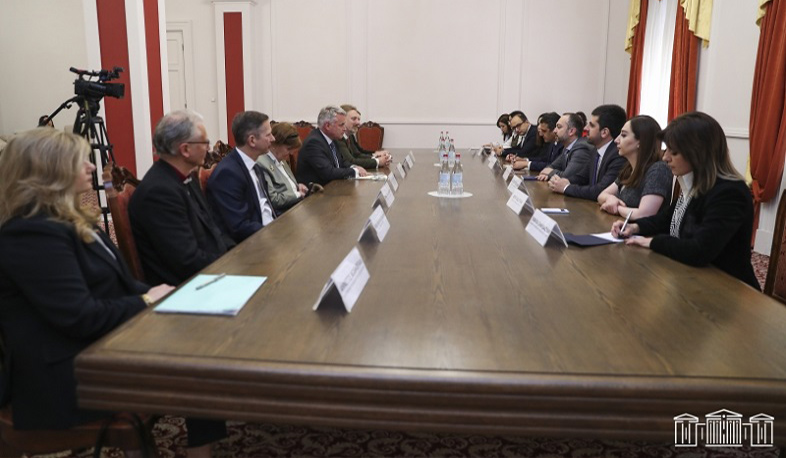 Welcoming the guests in Parliament, Eduard Aghajanyan highlighted the visit of the delegation during this difficult period for Armenia and Artsakh.

“On January 20, 2022 Armenia and the United Kingdom marked the 30th anniversary of the establishment of diplomatic relations. Armenia greatly values the stable development of the bilateral friendly relations with the United Kingdom. The atmosphere of the existing mutual respect and trust based on the common values is a firm basis for the further development of cooperation and the comprehensive use of the potential,” Eduard Aghajanyan said.

Tim Loughton thanked for the warm reception, mentioning that the programme of the visit is rather full. He expressed readiness to support for strengthening the relations between the two states.

Eduard Aghajanyan emphasized the further expansion and strengthening of the inter-parliamentary ties between the two countries, mentioning that this visit would be a new impetus for enlivening the activities of the groups and would give an opportunity to discuss numerous issues of mutual interest.

The cooperation of the representatives between parliaments of the two countries on the international parliamentary platforms was also attached.

Speaking about the Nagorno-Karabakh issue, the created situation, Tim Loughton mentioned that we should negotiate on the settlement of the issue. The problem of the cultural heritage preservation was also touched upon.

The Armenian parliamentarians expressed their gratitude to Baroness Caroline Cox for being next to the Armenian people, as well as for her caring and merciful attitude towards Artsakh.