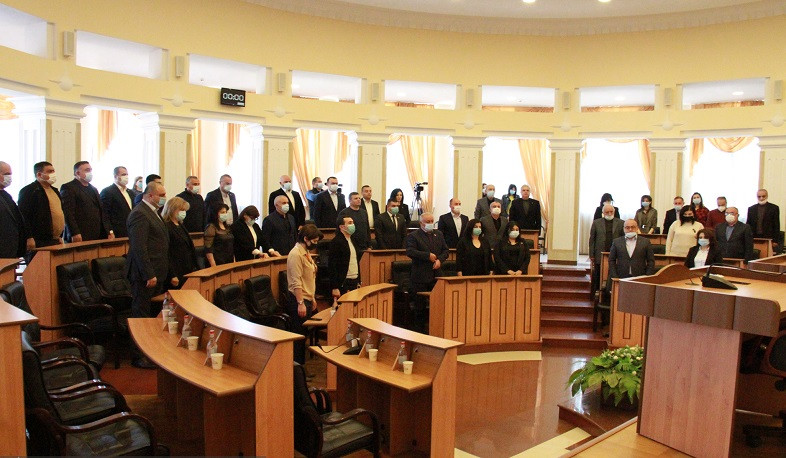 On November 9, the Artsakh’s (Nagorno-Karabakh) National Assembly convened a special session, chaired by Parliament Speaker Arthur Tovmasyan. One issue on the agenda was the statement of the National Assembly of the Artsakh Republic ‘On the undisputable right of the people of Artsakh to live freely and independently’.

Before moving on to the issue on the agenda, the Speaker of the Artsakh National Assembly Arthur Tovmasyan referred to the anniversary of the day, emphasizing the undeniable feat of the devotees of the Homeland and the message left by them.

“The message left by all of them is one - to live, to create, and to become strong on this land. Therefore, we must overcome that pain by living, by strengthening our Homeland, so that the name and work of our heroes will live forever.”

Those present stood in silence for a minute to honor the memory of the Armenians who died in all the Artsakh wars.

In his speech, the Parliament Speaker condemned another provocative criminal act of the Azerbaijani side on November 8, aimed at the civilian population.

The Parliament unanimously adopted the statement of the National Assembly of the Artsakh Republic ‘On the undisputable right of the people of Artsakh to live freely and independently’.

We present the announcement in full below.

“In the autumn of 2020, Azerbaijan, with the support of Turkey and international terrorist groups, ignoring the basic principles of international law, carried out aggression against the Artsakh Republic, occupying most of the territory of the Republic after a 44-day war.

Due to the forcible deportation of the population of Artsakh from its historical Homeland, thousands of families were deprived, hundreds of national-cultural, Christian monuments and mmemorials were deprived of their Homeland, destroyed and desecrated.

A year ago, on November 9, the bloodshed in the Azerbaijani-Karabakh conflict zone was stopped by the mediation of the President of the Russian Federation. Nevertheless, we strongly believe that the threat to the physical security of the people of Artsakh can be prevented and long-lasting peace between the peoples living in the region can be established only in the case of the restoration of the territorial integrity of the Artsakh Republic, the return of our captive compatriots and forcibly displaced persons to their homes, and the settlement of the conflict on the basis of nations' right to self-determination.

We call on the international community, namely, the OSCE Minsk Group Co-Chair countries, to take urgent steps to resume the negotiation process with the participation of the Artsakh authorities in order to ensure a comprehensive settlement of the issue.

Recalling the memory of all the martyrs who sacrificed their lives for the Homeland, and recording the legitimacy of Artsakh's declaration of sovereignty and subsequent processes and compliance with international and domestic legal norms, the Nagorno-Karabakh National Assembly, as the highest representative body, reaffirms its commitment to preserve a free and independent Artsakh undertaken in 1988, and the determination of the people of the Artsakh Republic in defending their right to live and create freely in their Homeland.”