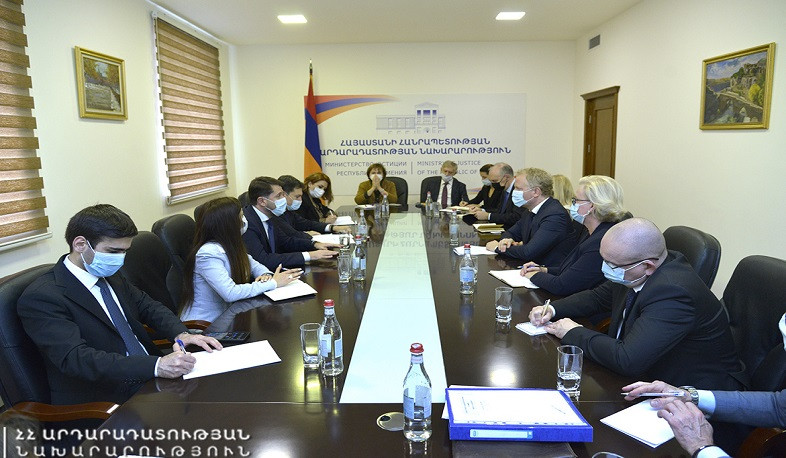 Armenia expects the Council of Europe to show a clear position on the issue of Azerbaijan, to put pressure on that country to return Armenian prisoners of war (POWs) and other civilians held in Azerbaijan to the Homeland. The Minister of Justice of Armenia Karen Andreasyan stated this during a meeting with the delegation led by the Permanent Representative of the Committee of Ministers for Democracy, Ambassador Mårten Ehnberg, Permanent Representative of Sweden to the Council of Europe.

Minister Andreasyan greeted the high-ranking representatives of the Council of Europe at the Ministry of Justice, emphasizing that the Council of Europe is one of Armenia's strong partners, with which cooperation in a number of directions is: fight against domestic violence, improvement of probation service, protection of human rights in penitentiaries, judiciary reforms, anti-corruption struggle, etc. In this context, Karen Andreasyan thanked the Council of Europe for its readiness to support key donor countries in Armenia’s reform agenda.

In response to the questions of the Ambassadors of the Council of Europe, Minister Andreasyan referred to the process of constitutional reforms, digitalization of the judicial system, the program of establishing ‘Justice Houses’ providing public services in Armenia, as well as the opportunities to increase the efficiency of the Compulsory Enforcement Service, the establishment of the Ministry of Internal Affairs, the creation of a penitentiary institution with a new model of patrol service, with well-behaved servants, etc.

The head of the delegation Mårten Ehnberg stated that he was inspired by the implemented reforms and planned programs and wished success in implementing the ambitious agenda.