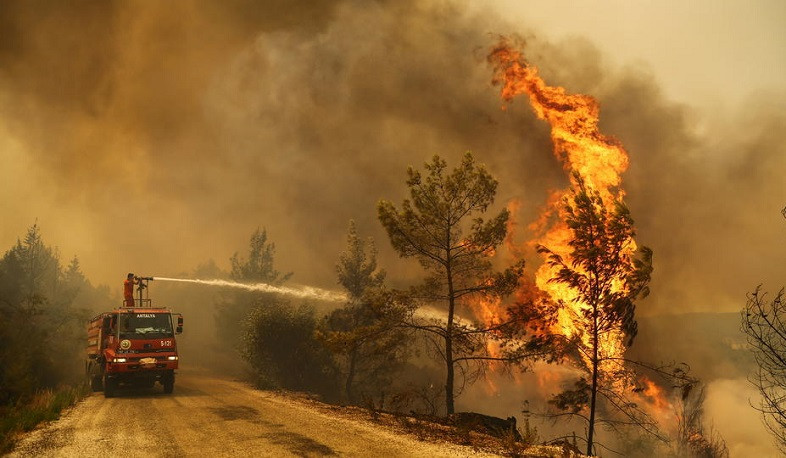 The forest fires raging in Turkey were approaching a thermal power plant at Milas on Tuesday, a local official claimed, Euronews reports.

Milas mayor Muhammet Tokat said the out-of-control fire had passed a critical point and was heading towards the power plant.

It comes amid the country's worst blazes in at least a decade. Eight people have been killed and thousands evacuated.

The wildfires have devastated forests and farmland as well as inhabited areas on the Mediterranean and Aegean coasts.

An AFP team in the Aegean town of Marmaris saw farmers pulling their animals out of burning barns and moving them to a beach to bring them to safety.

Frightened tourists and villagers were evacuated by boat as high winds and heat spread the flames.

Temperatures above 40 degrees in several cities in Turkey also caused a record increase in electricity consumption, leading to blackouts on Monday in major cities like Ankara and Istanbul.

The European Union has sent three firefighting planes to the country in a bid to help. Russia, Ukraine, Azerbaijan and Iran have also sent water bombers to Turkey.

The fires began last Wednesday and now threaten the cities of Antalya, Bodrum and Marmaris, where hundreds of tourists and residents were evacuated from their hotels and homes on Sunday.

More than 1,100 people were evacuated by boat, Bodrum Mayor Ahmet Aras said on Sunday, as roads were not usable.

Eight people have been killed by the fires and a total of 10,000 have been evacuated in Mugla province alone.

In all, 129 fires that broke out in over 30 provinces have been extinguished. More than 4,000 firefighters have been deployed on the grounds.